Jonathan Martinez is in for a tough test when he steps in on short notice against Andre Soukhamthath at UFC Moncton — but luckily, he was already in fight shape.

Moncton, NB — Stepping in on short notice against dangerous bantamweight Andre Soukhamthath, Jonathan Martinez (9-1) has a chance to make a big first impression at UFC Moncton. He got his first exposure to the UFC machine during fight week in the east coast province of New Brunswick, Canada, nestled on the Atlantic Ocean. For Martinez, who was born in Los Angeles, California and now fights out of Texas, waking up to snow on Thursday morning ahead of UFC Moncton’s media day wasn’t exactly a warm welcome, flurry or not. Still, it’s real hard to rain (or snow) on his parade at the moment.

On how he got the call to step in on short notice against Andre Soukhamthath in place of Gavin Tucker, Martinez revealed that he was going to his day job at a seed company. “I was going to work the other day, it was six in the morning, and my manager called me and told me they wanted me to take a fight.” He admitted he had no idea who his opponent was going to be when he accepted the fight. “I didn’t know the guy til my brother who was next to me said ‘I know who it is, I just looked him up.'”

Martinez, still at work, then had to play the waiting game. No easy task, as even though he was “supposed to do my job, I was just thinking, like waiting for the time and then later on they told me ‘hey, you got it.'” At that point, he got to deliver the news to his boss that he’d be training full time.

That was three weeks ago. His boss wished him well. And like that, Jonathan Martinez was in the UFC.

Luckily, he already had a fight lined up, and was in fight shape. As for what fans unfamiliar with the flyweight (he’ll be facing Soukhamthath at bantamweight in this instance) can expect, well look for him to be exciting. “I’m real exciting to watch,” Martinez said. “I have a lot of finishes, submissions. I just like putting on a show really.”

He knows what to expect from ‘The Asian Sensation’ as well, admitting that he was “a little bit” familiar with his opponent at UFC Moncton. “I seen a couple of his videos and stuff like that. But not that much.” That said, he’s been watching video.

For Martinez, fighting was a way out of trouble. Or perhaps more accurately, fighting as a professional was a way to divert him from fighting on the street. “I think I was thirteen when my parents brought me from Los Angeles,” he recalled, “and I kept getting in trouble because I wanted to go back. I kept fighting in the streets, so my parents put me in Taekwondo, and I stayed there. I started getting real good at it.”

The rest, clearly, is history. Following the Soukhamthath bout, Martinez expects to drop back to flyweight. Assuming, of course, that there’s still a flyweight division to drop down to. 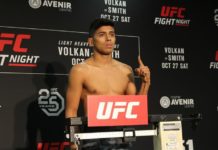 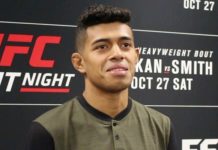 Bellator 238: Emilee King Looked to Coach’s Fight with Heather Hardy as Blueprint for...