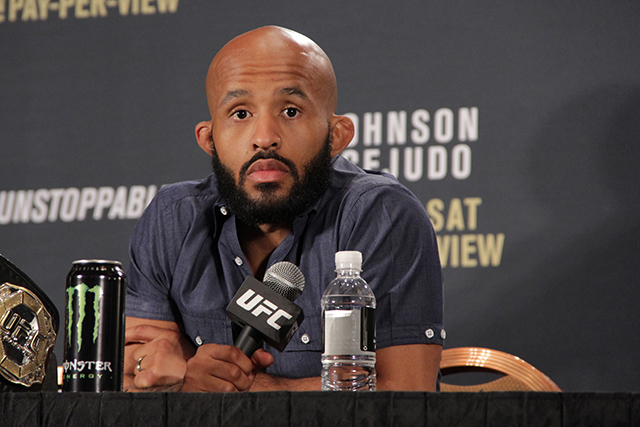 An ESPN report this morning states that the UFC and ONE Championship are close to a groundbreaking trade that would send Demetrious Johnson to Asia for Ben Askren.

Per ESPN, the UFC is close to a groundbreaking trade with ONE Championship that would involve releasing the rights to Demetrious Johnson in exchange for an identical deal that would allow them to sign Ben Askren. Should it be completed, it would be the first of it’s kind in terms of magnitude and with fighters of such caliber.

Per the report, the deal is not yet finalized but sources are saying that all signs are pointing toward it being completed. The deal is unprecedented considering the UFC has historically been so staunchly against even the idea of co-promotion that to send over arguably the greatest champion in company history is game-changing as it sends the message that previously concrete deals that must be completed are not as set in stone as once believed.

Johnson was recently unseated as flyweight champion this past August after recording an astounding eleven consecutive title defenses since winning the title in 2012. He lost the belt via split decision to Henry Cejudo in a rematch of their first fight in 2016 and many figured that a rubber match would be imminent when Johnson returned after recovering from a broken foot suffered in the fight and welcoming his new daughter over the summer.

In the build-up to the fight with Cejudo in August, Johnson had notably mentioned that a challenge that excited him would be to fight the flyweight champions of different promotions around the world so that he may collect different belts for his trophy case. However, he stated that it was not a venture he would embark on due to his obligations to his family.

In exchange for the right to sign Demetrious Johnson, One Championship would be releasing “Funky” Ben Askren. Askren is undefeated at 18-0-1 and has held titles in both Bellator and ONE. Askren first came to prominence in winning Season 2 of the Bellator welterweight tournament in 2010 and would go on to win the championship and defend it five consecutive times. Askren elected to test free agency in 2013 and signed with the Asian promotion where he quickly became welterweight champion.

Askren had been in talks with the UFC during free agency but negotiations quickly fell apart as it appeared the UFC was not interested in making a deal. In January, Askren said on the Joe Rogan Experience that the UFC had told him they would not offer him a deal until he was unconditionally released from his Bellator deal back in 2013. When Askren was granted his release and attempted to follow-up with the UFC, the company then gave him the stipulation that he fight once with the former WSOF. The fight would have been paid for by Zuffa and he was told he would then be brought into the UFC. Askren claims he agreed to the deal, but that the UFC called him later to say they had rescinded the offer and would not be moving forward.

Askren is widely considered one of the best fighters to have never competed in the UFC. A training partner of current welterweight champion Tyron Woodley, Askren announced his retirement at 34-years-old back in 2017 but stated that he would consider fighting again should he face an opponent such as MMA superstar Georges St. Pierre.

While the idea of a fighter for fighter trade is unheard of in MMA, several promotions have dabbled in cross-promotion over the years. Most notably, Strikeforce co-promoted shows with Russian company M-1 Global when they signed Fedor Emelianenko back in 2009. In more recent years, Bellator has co-promoted shows with Glory Kickboxing in a hybrid event that featured both MMA and kickboxing on the same night with stars of both promotions.

Beyond the immediate implications of losing a fighter of Johnson’s caliber and gaining a talent like Askren in the UFC, the deal opens the doors for what is possible in the future. While it appears to be a special one-off deal for now, the fact that the UFC is open to dealing fighters of this caliber sends a message that the business is venturing into territory previously considered unheard of.