The Pro Fight League post season wound down in Washington, D.C. as PFL 10 saw two fights in a night for fighters in the welterweight and middleweight divisions, including Jake Shieds, Rick Story, John ‘Doomsday’ Howard and more!

Winners at Saturday night’s PFL 10 in the nation’s capital would head to the million dollar finale on New Year’s Eve in New York City. But to get there, they’d have to come out on top in not one but two fights. In one of the more interesting contests of the evening, Jake Shields was scheduled to face Ray Cooper III for the second time this year, after Cooper defeated him in the regular season. The event was scheduled to kick off at 7PM ET, with the PFL 10 Live Steam exclusively online, plus the main card on NBC SN (FaceBook Watch outside the U.S.)!

You can catch all the action on the PFL 10 live stream below! Check back come fight time for a recap and full results from the night’s action!

Kicking off the main card was a welterweight quarterfinal between Handesson Ferreira and Rick Story. Ferreira connected with a kick to the body early. He then managed to get the upper hand with a takedown, changing levels off an overhand punch, and worked to pass guard. They’d stay down for a bit, but Ferreira couldn’t make much happen. Back on the feet with two minutes remaining, Story was showing a bit of damage by one eye, but caught a kick looking to dump Ferreira on his back. He couldn’t hold on, and instead they wound up clinching, then reseting back out in the open. Story began attacking the lead leg of Ferreira. Towards the end of the round things got wild. Story looked for a single leg and got thrown to the ground. Story rolled through while Ferreira chased him, but it was Story coming back up and throwing hands.

Round two had Ferreira getting Story down early, taking the back and dropping some bombs. Trapped, Story was forced to submit to strikes verbally, as Ferreira tried to get the ref’s attention. It appeared as though Story had injured his arm.

In middleweight action, Santos held center early, shooting in on Sadibou Sy who easily escaped. Santos would grab single leg shortly after, but spent well over a minute trying to land it, with Sy showing impressive balance to fight it off. Santos finally gave up on the hold. Coming out of the round, Sy had the edge in strikes, while Santos, despite multiple attempts, was unable to get his opponent to the ground.

That changed in the second round. Santos finally got Sy down, and moved into half guard, looking for a choke. Sy continued to move, rotating his body as Santos circled with him. Santos would take mount with under a minute remaining in the frame. He was unable to find a way to finish, however, and it cost him.

In a rematch from the regular season, Shields dropped low for the takedown early, only for Cooper to wind up in dominant position, eventually taking the back. Shields would make it back up to the feet, leading to a clinch and the ref separating the pair. Cooper went on the attack, resulting in a wild takedown attempt from Shields. Shields would take more damage on the way back up, and back on the feet would almost immediately be dropped by a right hand! Cooper would begin unloading with blow after blow until the ref finally waved it off!

Magomedov worked his standup from on the larger Umalatov early in round one, then took the fight to the ground after a failed takedown from his opponent, working his way to half guard and trying to posture up to land some looping punches. He was able to control Umalatov, but the ref eventually opted to stand the pair up. Back on the feet Umalatov surged forward in the final ten seconds, throwing heavy hands before looking for a takedown just as the bell sounded.

Round two had a bit of a sparring match feel to it, with a lot of movement on the feet but very little landing clean. With Magomedov having likely secured the first round, Umalatov needed a finish, but it was Magomedov taking him to the ground ever so briefly at the end, dashing his hopes of moving into the semifinals.

Abuspiyan Magomedov vs Gasan Umalatov ended in a majority draw (20-18, 19-19, 19-19) – Magomedov advances via first round tiebreaker

With Abubakar Nurmagomedov unable to continue on in the tournament due to injury, the first semifinal of the evening at PFL 10 saw welterweight Bojan Velickovic back in action thanks to the lucky loser rule. Velickovic was anything but lucky in the first round, however, as Magomed Magomedkerimov outclassed him, put him on his back, and dropped some hard shots from the top before controlling him on the ground to close out the round.

In the second, Magomedkerimov was able to sweep while the pair were on the ground, again taking control. Back up, with about two minutes remaining, the Dagestani-Russian began landing again and again, each strike doing more damage to Velickovic, who had never before been stopped. That would change after a sequence set up with a straight right hand, crashing home at 30 MPH.

Howard took center early, pressing forward as Taylor looked to fend him off with kicks. Taylor launching a couple of flying knee attempts in the first ninety seconds. However, he was being backed up by Howard. At least until the final minute of the round saw Taylor clip Howard with a left that trailed a knee that just missed, then knee him in a clinch and take him to the ground. Howard was still recovering, and nearly found himself in a guillotine. He’d escape, eat a stiff jab, and wind up taken down again to close out the round.

Round two saw Howard looking to turn things up a little, but he’d wind up taken down by Taylor just over a minute in. Taylor immediately moved to half guard, then looked to pass to mount. Taylor would stay on top until a scramble saw Howard break loose. They’d clinch, but the ref was quick to separate them. Taylor would eventually wind up back on top as the round wore down, landing body shots, but just prior to the bell Taylor fired a knee that caught Howard in the head while he was down. While it was no doubt aimed at the chest, the blow connected with Howard’s head clean, and after a long examination, doctors ruled he could not continue.

Luis Taylor vs. John Howard ends in a technical draw, Round 2, 4:58 — Howard was unable to continue due to an unintentional illegal knee. Luis Taylor advances via first-round tiebreaker

Cooper pressed the action early, keeping Ferreira on his heels. He’d catch a kick and convert the takedown, putting Ferreira on his back. Cooper would work from half guard, and while Ferreira worked back to the fence, he gave up his back standing up. From there, Cooper looked similar to the Shields fight earlier in the night, dropping some thunderous punches as Ferreira covered up. A second first round finish in one night for Ray Cooper III!

Magomedov opened the action in the night’s final bout with some flash, going high with a kick and launching a jumping attack. Sy answered with a kick to the side of the head that was blocked, but made an impact nonetheless. Magomedov then began to walk down Sy, only to eat kicks to his lead leg for his efforts. Magomedov continued to work in some high kicks, but Sy was using his length to keep him on the outside.

In the second, Magomedov was again on the hunt, stalking Sy, who tried to keep him at bay with an arsenal of kicks. More often that not, he was jogging away from Magomedov, who finally closed the distance and worked for a takedown with just over three minutes remaining in the frame. Just a little bit of effort led to a big slam, and while Sy would try to scramble away, Magomedov stayed on him. He moved to mount, then postured up looking to land ground n’ pound. When that failed, an arm-triangle choke attempt followed. Sy fought that off, and Magomedov returned to mount, much higher this time, and land some heavy strikes before the bell sounded.

In round three, it didn’t take long for Magomedov to get Sy to the ground. Taking the back with a body triangle locked in, he worked for a rear-naked choke, but Sy managed to defend. He’d try to soften Sy up with punches, looking for an opportunity to sink the choke in again. At the end of the round, scrambling free, Sy would have an opportunity to take control and maybe find a finish. Instead, Magomedov scooped him up and slammed him to the canvas one last time, ending the fight in side control. On the scorecards it was Magomedov with the clear decision, and he’ll move on to face Luis Taylor at the finale. 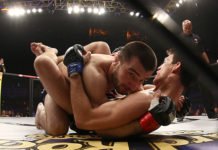