Khabib Nurmagomedov now feels that April’s bus attack incident, sparked by Conor McGregor ahead of UFC 223, may have been a set-up.

UFC lightweight champion Khabib Nurmagomedov is suddenly in the spotlight around the clock, it seems, and recently, things got a little zanier. Nurmagomedov, who defeated Conor McGregor via fourth round submission at UFC 229 just over a week ago, sparked a melee and near riot when he flew into the crowd immediately after the fight to attack McGregor’s teammate Dillon Danis. The brawl that ensued saw three of Nurmagomedov’s teammates attack McGregor, leading to at least one fighter apparently cut from the promotion in Zubaira Tukhugov. Of course, Nurmagomedov has claimed he’ll walk from the promotion if that does in fact happen. And over the weekend, he made another outlandish claim: that the UFC staged the entire UFC 223 bus attack incident.

That incident, of course, saw Conor McGregor and multiple accomplices storm the Barclay’s Center in Brooklyn during Fight Week this past April, ahead of UFC 223. McGregor was filmed smashing the window of a bus housing Nurmagomedov, and later faced criminal charges. He has also been subsequently sued by Michael Chiesa, who was on the bus and cut by broken glass.

“I had a team of about 20 men. We had a bus just like that, hired (for us) to go to the gym, press conferences all the media activities and so on,” Nurmagomedov told Channel One (via RT).

“But you know what’s interesting – on that day the UFC told me that on that media day I had to arrive alone. So I was traveling with all the other fighters who would fight from the red corner. I was in the red corner as well as a favorite. With me there was only one person (from my team) and my manager.”

“And if you watch the footage, you can see that the bus almost gets to the gate, and then suddenly it stops and pull back,” Nurmagomedov continued, then questioned “Why? If you see that some people are attacking the bus, then you should keep moving and get outside (from the parking lot). But then you stop and pull back. Why? For me there are a lot of questions. I don’t know whether the UFC made it all on purpose or not.”

“But they started to attack (the bus), break (windows). It was a crowd of around 20 men. Inside (the bus) we had three security guards. And as you can see (in the video), there were security guards outside as well, trying to stop Conor. In my opinion, I give 70 percent that it was a set-up.”

April’s bus attack was in response for another incident involving Nurmagomedov, in which he cornered McGregor’s teammate Artem Lobov in a hotel lobby and grabbed him by the neck, with several accomplices of his own. Nurmagomedov was never charged or sanctioned by the UFC for that incident. Following the brawl that broke out at UFC 229, his purse was withheld by the Nevada State Athletic Commission — all two million dollars of it. Both McGregor and Nurmagomedov’s behavior after the fight is being reviewed, although the commission has paid out McGregor’s full purse.

Meanwhile, Nurmagomedov has been busy calling out Floyd Mayweather (that exact detour outside the UFC by Conor McGregor frustrated millions of mixed martial arts fans). Only, he doesn’t want to fight in Vegas.

@floydmayweather But no Vegas, they won’t pay my money.

Floyd Mayweather, meanwhile, claims to be interested. If all involved “get the checkbook out” at least. 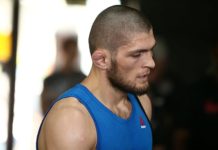