Frank Mir is making the trip to Hawaii this December, as he’ll meet Javy Ayala at Bellator’s recently announced Salute the Troops event.

Former UFC heavyweight champion Frank Mir will return to the Bellator cage this December in Hawaii. On Thursday, MMA Junkie was first to report that Mir will take on Javy Ayala in the co-main event of Bellator’s “Salute the Troops” show. The recently announced event comes a day before Bellator 213, where Hawaii’s own Ilima-Lei Macfarlane defends her women’s flyweight title against Valerie Letourneau.

Mir (18-12) fought exclusively for the UFC between 2001 and 2016. There, he won the promotion’s biggest prize after submitting Tim Sylvia at UFC 48. However, he was stripped of the belt after a motorcycle accident kept him out of action for over a year.

Feared for his ground game, Mir holds notable wins over Sylvia, Antonio Rodrigo Nogueira (Big Nog), Bigfoot Silva, Roy ‘Big Country’ Nelson, Mirko Cro-Cop, Cheick Kongo, and, of course, Brock Lesnar. However, following a failed drug tested under USADA after a loss to Mark Hunt at UFC Fight Night 85 in 2016, he exited the company. Once his suspension was up, he made his Bellator MMA debut, losing to Fedor Emelianenko earlier this year. That fight went down in April at Bellator 198, and served as a quarterfinal match-up in the promotion’s World Heavyweight Grand Prix.

Mir will look to snap a three-fight losing streak when he faces Javy Ayala (10-7). Ayala was first noticed in Bellator’s heavyweight division after a shock upset of Sergei Kharitonov at Bellator 163 two years ago. There, he knocked the dangerous striker out in just sixteen seconds. However, Ayala is 0-2 since then, losing to both Cheick Kongo and Roy Nelson.

Bellator: Salute the Troops takes place at the Neal S. Blaisdell Center in Honolulu, Hawaii on December 14. Michael Chandler and Brent Primus meet for the second time in the night’s main event. 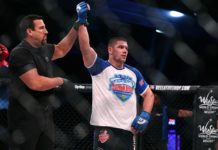