Actress Halle Berry is set to make her debut behind the camera with the MMA film Bruised, in which she will also star.

Another MMA-themed motion picture is in the works, and this time, it has an A-list star attached. Halle Berry, who has been in training for the upcoming John Wick 3, is set to star in Bruised — and she’ll also make her directorial debut with the picture. Deadline provided a scoop on the details, noting that Berry will be teaming with John Wick producer Basil Iwanyk on the film.

The plot centers on Jackie “Justice,” a “disgraced MMA fighter who has failed at the one thing she’s ever been good at — fighting.” Jackie then has to adapt as Manny, the six-year old child she walked out on years earlier, returns to her life. That, at the same time as she’s looking at the biggest opportunity in her MMA career.

Berry won the Best Actress Oscar for her performance in 2001’s Monster’s Ball. She looks to be in great shape, and recently addressed the work she’s been putting in at the gym as she continues to train for John Wick 3. A few months back, she was also seen training in BJJ in preparation for the role.

From the sounds of it, Bruised may have some supporting roles open that could appeal to any number of fighters. Berry just happens to be represented by WME, the current ownership behind the UFC. With fighters like Michael Bisping, Tyron Woodley, Max Holloway, Ronda Rousey, and others venturing into acting, there’s a good chance you’ll see a few familiar faces in the film. 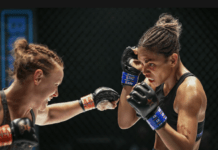 So You Want to Be a UFC Matchmaker? Here’s Your Chance