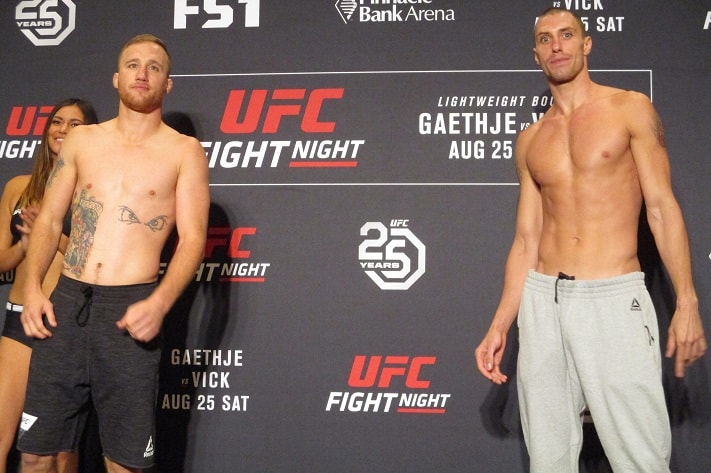 The always-entertaining Justin Gaethje returned to action at UFC Lincoln, looking to snap a two-fight losing streak that nevertheless pocketed him a pair of Fight of the Night awards. ‘The Highlight’ was facing off (or better yet, looking up at) against the towering James Vick, in a rather heated grudge match.

Cageside Press has our picks in for the main event of UFC Fight Night 135 in Lincoln! The six-fight main card has a number of promising bouts, none more so than the main event. Justin Gaethje is a human highlight reel, concerns about his dangerous style notwithstanding. Michael Johnson vs. Andre Fili holds promise in the co-main event, while Angela Hill had a chance to shine against short-notice replacement Cortney Casey.

Who are we going with for the main card? Check below!

The main event of UFC Lincoln features James Vick attempting to propel himself into the top five against Justin Gaethje. Vick is on a four-fight win streak and most recently defeated the always-tough Francisco Trinaldo in his last bout. While Gaethje’s three fights in the UFC have been spectacular, he’s dropped his past two to Eddie Alvarez and Dustin Poirier. Seven of nine writers sided with Gaethje.

Michael Johnson and Andre Fili square off in the co-main event. Johnson recently lost his featherweight debut to Darren Elkins, while Fili is coming off wins over Dennis Bermudez and Artem Lobov. Fili received a slim 5-4 lead from the staff.

Cortney Casey battles Angela Hill on the main card. Casey was a quickly rising strawweight, but losses to Felice Herrig, Michelle Waterson, and Claudia Gadelha within her last four fights slowed her ascent. Since returning to the Octagon after a great stint in Invicta FC, Hill has gone 2-2. All but one writer picked Casey.

Bryan Barbarena faces Jake Ellenberger after going 1-1 in 2017, most recently falling to Leon Edwards. Ellenberger has lost five of his last six, and will be looking to avenge his brother Joe’s loss to Barbarena from back in 2014. Barbarena was unanimously picked by the staff.

John Moraga looks to continue his climb towards a second title shot against Deiveson Figueiredo. Moraga has turned a corner in his career, winning three straight including one over Wilson Reis. Figueiredo is an exciting Brazilian scrapper who has won his first three fights in the promotion. Six of nine writers picked Moraga. 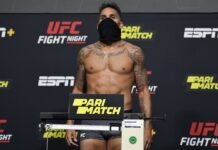 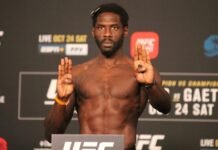 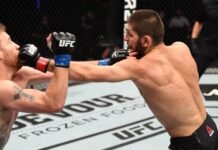 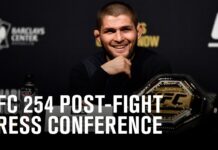