Mickey Gall wasted no time re-establishing himself as a hot prospect in the UFC, making short work of George Sullivan at UFC Lincoln with a rear-naked choke submission.

At UFC Lincoln on Saturday night, prospect Mickey Gall — the CM Punk, Sage Northcutt hype killer — was looking to get back on track after the first loss of his professional career. That had come against Randy Brown, back at UFC 217. Roughly nine months later, and Gall was back in the cage, this time opposite George Sullivan, a gritty veteran looking to snap a two-fight losing skid.

Gall opened up the action in this televised preliminary bout, moving in with a kick, and quickly getting the fight to the ground. He imediately locked on a body triangle, and began softening up Sullivan from the back. He quickly had the rear-naked choke in place, and before you knew it, he had forced the tap! An incredible performance from Gall, who shoots right back up to hot prospect status in defeating a rugged, longtime MMA fighter in Sullivan.

Incredibly, it was a faster finish than Gall’s victory over CM Punk, which also ended by rear-naked choke. After the bout, Gall called out both Sage Northcutt (calling him Corncutt) and Diego Sanchez, targeting a date in New York at MSG. 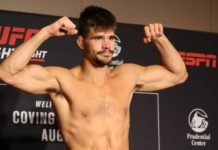 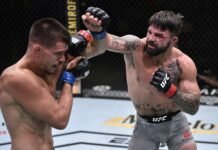