With the flyweight division wide open, Ray Borg and Joseph Benavidez will battle at UFC Denver to see which 125lb standout can get back in the title hunt.

Despite a number of media outlets listing the fight for UFC 229, it appears that the flyweight battle between former title challengers Ray Borg and Joseph Benavidez is heading to the mountains instead. The UFC revealed to the Denver Post that Borg vs. Benavidez will feature on UFC Denver, otherwise known as UFC Fight Night 139. The show serves as the 25th Anniversary event for the promotion, as UFC 1 went down in Denver, CO back on November 12, 1993.

Borg (11-3) has not fought since his loss to then-champ Demetrious Johnson at UFC 216 last year. He had been scheduled to face Brandon Moreno at UFC 223, but suffered debris in the eyes following Conor McGregor’s attack on a bus ahead of the event, a bus on which both Borg and current lightweight champ Khabib Nurmagomedov were on, as well as others.

While the Moreno fight was originally rescheduled for the UFC’s debut in Chile in May, Borg was again forced to pull out, this time due to a serious medical condition impacting his infant son. Moreno would stay on the Santiago, Chile card, only to lose to Alexandre Pantoja.

Joseph Benavidez (25-5) had a six fight win streak snapped when Sergio Pettis edged past him in a split decision at UFC 225 in June. With Demetrious Johnson having lost the flyweight title to Henry Cejudo just days ago at UFC 227, Benavidez (who lost twice to Mighty Mouse) is suddenly one of the bigger names ready for a shot at 125lbs, if he can get back in the win column.

Of course, the UFC may elect to give Johnson an instant rematch first — but the shake-up is certainly good news for Borg, Benavidez, and the like.

UFC Denver is headlined by a featherweght scrap between Frankie Edgar and The Korean Zombie. The event will be held at the Pepsi Center in Denver, CO on November 10, 2018. 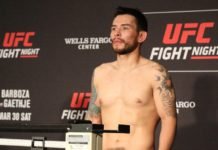 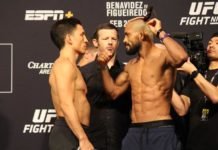