In early action from UFC Hamburg’s prelims on UFC Fight Pass, Liu Pingyuan put in a spirited effort to top Damian Stasiak, part of a trio of exclusive bouts on the streaming service.

The UFC had touched down in Hamburg, Germany on Sunday, with UFC Fight Night 134. The card was topped by a pair of light heavyweight battles: the Pride legend and former UFC 205lb champ Shogun Rua taking on Anthony Smith, and Glover Teixeira facing American Corey Anderson.

Earlier in the night (or morning for those in the west), UFC Fight Pass featured a three pack of preliminary bouts, topped by Davey Grant vs. Manny Bermudez at bantamweight.

Check back throughout the event for a recap and results from UFC Hamburg’s Fight Pass Prelims!

Damian Stasiak stayed on the outside and opened with a leg kick in the opening bout of UFC Hamburg. Pingyuan pushed his opponent up against the fence. After separating, Pingyaun countered a leg kick with a left hand, knocking Stasiak down more by throwing him off balance than by actually hurting him. Stasiak would later change levels and get the fight to the ground. He went to work from guard, while Pingyuan stayed active from the bottom, and scooted back to the fence. That allowed him to wall walk up, but he put himself right into a guillotine. However, despite jumping for it and Pingyuan standing with his opponent’s weight, time in the round expired.

The second round featured an opening minute feeling out process, at the end of which Pingyuan backed Stasiak up against the fence. He then executed a picture perfect spinning back fist, connecting clean. Stasiak went into defensive mode, eating a few strikes before shooting for a takedown. Pingyuan wouldn’t stay down long, but Stasiak dragged the fight down again. However Pingyuan cinched in a guillotine, only for Stasiak to scramble free. Back on the feet he’d connected with a spinning back kick to the body. A grappling exchange led to Pingyuan pulling guard for a guillotine, but Stasiak pulled free. They’d finish the round on the mat, with Stasiak on top.

Thirty seconds into the third round, Stasiak had completed a takedown out in the open. But Pingyuan reversed, dropping some heavy blows from the top. He used smart head position to control Stasiak, driving his forehead into his opponent. However, the Chinese fighter opted to stand back up, clearly feeling his path to victory was on the feet. Stasiak in turn shot for a single leg, with Pingyuan displaying great balance as he remained standing. Pingyuan threw and elbow off the break, and the pair re-engaged out in the open. Stasiak landed a combination; Pingyuan fired off a leg kick then tried to close the distance with an overhand. Another spinning back fist by Pingyuan, but this time it missed. He followed that with another big overhand. Stasiak changed levels, but Pingyuan fought off the takedown. They’d come to the final minute, and Pingyuan would go on to claim the unanimous decision victory.

At light heavyweight, Jeremy Kimball worked in some leg kicks early, and the pair went through a brief feeling out process. Stosic held center, but it was Kimball who seemed to find his range first. Stosic looked to be waiting to throw a counter. Stosic’s early show of patience soon paid off. Kimball shot in for a takedown, but Stosc reversed and got on top. He dropped an elbow, causing Kimball to cover up, and soon the hammer fists were in flight. A couple of those, and that was it!

Slick reversal & nasty GnP! @darkostosic92 gets the TKO win in his debut at #UFCHamburg! pic.twitter.com/dlqOWDRZkk

Early on in the featured fight pass prelim, Manny Bermudez dropped Davey Grant with a perfectly placed right hand. That allowed Bermudez to move in and try for an arm-bar, then cinch in a triangle. Grant tried to roll, scramble, pull free somehow, but Bermudez had the submission in tight! Grant went out, and it was over just under the one minute mark. 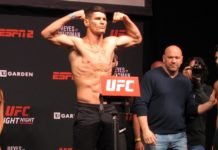 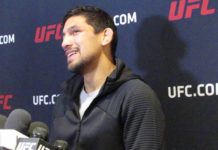 UFC Boston’s Manny Bermudez: A Lot of Fighter Beefs Are Played Out for the Cameras 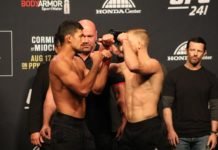