Bellator 208 will feature one of the promotion’s huge heavyweight tournament bouts on Long Island on October 13.

The event will be held on October 13 at NYCB Live’s Nassau Coliseum in Uniondale, New York. The event will follow Bellator 207, which will take place just one day prior in Uncasville, Connecticut, and feature the other semi-final bout of the Bellator heavyweight tournament of Ryan Bader vs. Matt Mitrione.

Fedor Emelianenko reached the final four of the tournament after a thrilling 48-second brawl with Frank Mir in which both men were knocked down before Fedor’s finishing blow. The match was Fedor’s long-awaited debut, and his ticket to the semi-finals. The Russian heavyweight is known as one of the greatest fighters of all time due to his legendary run in the PRIDE organization.

Chael Sonnen’s first-round battle was not as thrilling, but he was able to get by the much bigger Rampage Jackson utilizing his wrestling ability to earn a decision victory. The victory was Sonnen’s second straight after he lost four of his previous five. The Bad Guy’s claim to fame is his trash talk style and his classic near-victory against Anderson Silva.

This will be the fourth MMA event in the Coliseum after the sport was legalized in New York two years ago. The UFC kicked off the trend in July 2017, and PFL has held two events there since then.

As of right now, Bellator 208 only contains its main event of Fedor Emelianenko vs. Chael Sonnen. The situation is the same for the event the previous day. With both bouts occurring in early October, the tournament can be expected to end in early-2019. For reference, Strikeforce’s Heavyweight Grand Prix lasted from February 2011 to March 2012 and was won by Daniel Cormier, who was an alternate. Bellator’s tournament began in January 2018. 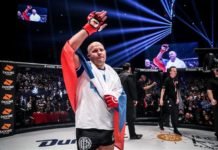