Junior Dos Santos battled for five rounds against Blagoy Ivanov in the main event of UFC Boise. And while it wasn’t a perfect outing, he got the job done, winning every round on the scorecards.

There’s starting big, and then there’s facing a former UFC heavyweight champion in your first fight for the promotion. Former Bellator and WSOF heavyweight Blagoy Ivanov, who held gold in the WSOF/PFL, was tasked with just that feat as he made his promotional debut at UFC Boise on Saturday. Opposite Ivanov in the octagon was Junior Dos Santos, one of the most feared strikers in UFC heavyweight history.

Would octagon jitters be a factor? Could Ivanov make his debut a feel good story, returning from being stabbed in the heart years back, to going to the WSOF and winning gold, to a big debut in the UFC? And how would Junior Dos Santos look after nearly a year out of action, following a USADA test failure that was eventually found to be the fault of a Brazilian compounding pharmacy and a tainted supplement?

Dos Santos stalked Ivanov, who circled on the outside early. JDS feigned a knee. Ivanov was nearly trapped on the cage. JDS fired, missed. He threw a kick. Ivanov was still trapped against the fence; Dos Santos fired off a big bomb over the top. That missed, Ivanov shot off a right hand. Dos Santos came back with a kick. Then a head kick, blocked. Ref Herb Dean then gave a warning about extended fingers when they weren’t extended, which visibly confused JDS. As action resumed, Dos Santos moved in, and Ivanov countered. Dos Santos went to the body with both punches as kicks as the round came to a close, and they’d go to the second.

In the second, JDS was still a threat with his kicks. Ivanov opted to hack at the lead leg of Dos Santos. He ate a jab from the Brazilian that seemed to bother his vision a bit. Dos Santos followed that up with a combination, then a body shot. A hard right followed by Dos Santos, who was starting to load up his shots. Ivanov tried to move in with a combination, but the former champ was using his jab to create space, going to the body with it frequently. Dos Santos then kicked a leg. Then leaned in and launched a right hand. The next combo from JDS caused Blagoy to eat at least one solid blow, but Ivanov appeared unfazed.

Junior Dos Santos opened round three with a kick, and Ivanov proceeded to press forward, chucking a couple of left hands that connected. He’d move inside again, clearly on the attack. Dos Santos opened with a right, moments later a punch landed that again bothered the vision of Ivanov. A jab connected up the middle for JDS. Ivanov was clearly showing discomfort with his eye, blinking frequently trying to clear his vision. They traded lefts, then Ivanov connected with a thunderous left that got Dos Santos’ attention. Moments later, a heavy right connected for Ivanov. Herb Dean then paused the action to give a “stern warning” to JDS for having his fingers extended. Underway, the ex-champ came in with a big overhand right, but couldn’t land it. He’d fire off a spinning kick, but Ivanov backed out of range. They’d trade to end the round.

Ivanov went to the body twice to open round four, but ate a heavy blow from Dos Santos in response. The right hand was a constant threat for JDS, but he had yet to land it flush. Ivanov fired a glancing left off the side of the Brazilan’s head. JDS was on his bicycle when Ivanov did attack as the round wore on; the newcomer, meanwhile, was looking tired.

Between the fourth and fifth Ivanov’s corner implored him to find a knockout. “We need a knockout,” was the advice. JDS was bloodied early in the fifth, but Ivanov had slowed. Dos Santos still had bricks for hands. On top of that power, he was the fresher fighter. An eye poke by Junior Dos Santos paused the action, and brought in the doctor. However, Ivanov was able to continue, and no point was taken. He then ate a big right, and stormed back, chasing after JDS. Dos Santos caught him again. He added a kick to the body, but Ivanov was now walking him down. For nearly the first time in the fight they clinched, and Ivanov landed off the break. Not hard, but JDS would connect with a few rights back in the middle. Ivanov would take advantage of an off-balance kick attempt to land a left, and he was swinging for the bleachers. The gas tank was empty, however. Dos Santos spoiled Ivanov’s debut, instead making his own return to the octagon a success.

After the fight, an elated Junior Dos Santos pointed out that timing is something that you don’t really get from training — you need to be in a live fight. As for who’s next, the former champion welcomed a rubber match with Stipe Miocic. 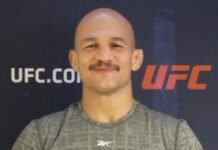 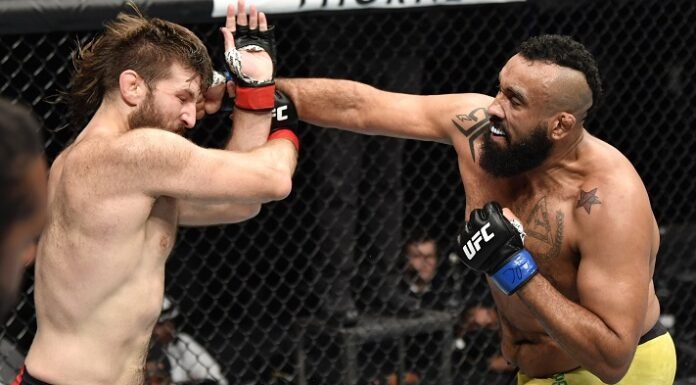 UFC 255: Cynthia Calvillo Feels Win Over Chookagian Would Be Deserving of Title Shot