The highly anticipated first title defense by Bellator flyweight champ Ilima-Lei Macfarlane took place Friday night at Bellator 201, as ‘The Illiminator’ took on Colombia’s Alejandra Lara. Yet before the main event got underway, there was a relatively stacked preliminary card that unfolded at the Pechanga Resort and Casino in Temecula, California.

While the return of Kristi Lopez will have to wait a little while longer (opponent Paola Ramirez essentially weighed in at bantamweight for the flyweight scrap, causing the CSAC to cancel the bout), names like Tyrell Fortune, Jordan Young and Ed Ruth peppered the early portion of the Bellator 201 card. That offered a chance to get another look at some of Bellator’s best prospects.

Also in early action, Keri Melendez, wife of former Strikeforce lightweight champion and UFC contender Gilbert Melendez, was back in the cage. 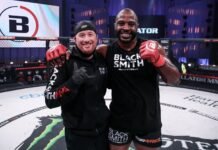 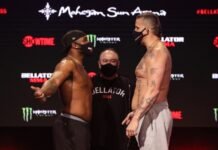