Kristi “Loba” Lopez suffered a broken hand in her Bellator debut that has kept her out for ten months.  But though she’s been out of the cage, she hasn’t stopped trying to spread her message.

In 2017, Bellator had the jump on the UFC in terms of the women’s flyweight division.  They had signed several marquee flyweights, including this Friday’s title challenger Alejandra Lara and UFC veteran Valerie Letourneau.  Among them was undefeated prospect Kristi Lopez, who was expected to develop under the Bellator banner.  Lopez would earn a draw in her promotional debut and she will now be returning to the cage for the first time in ten months due to a broken hand suffered in the fight.

Layoffs are nothing new to Lopez.  She went two years without a bout in 2014 before coming up short in a bid to enter The Ultimate Fighter house.  It would be another year and a half before she made her debut with Bellator against Jessica Sotack.  While the time away and rehabilitation on her hand was discouraging, it gave Lopez the opportunity to practice the philosophy she shares so often with others.  “The most important thing is to never give up.  Never give up on your dreams.  No matter how many times you get knocked down or how many broken bones you get you just keep getting back up.  Everyone has a light inside them.  That light might dim but don’t ever let it go out.  Don’t ever let anyone else put it out.”

While her training was limited for the latter part of the year, it did not stop her from continuing to work on her career.  She recently signed with a new clothing sponsor, Savage Barbell, and rather than take a simple picture, Lopez celebrated the partnership with a one of a kind announcement.

Asked to explain what inspired her to do a miniature production, Lopez said “I feel like everybody does very basic posts for when they sign (with a sponsor.)  So I figured why not have a little bit of fun with it and Danny (Moncada) of course was my camera operator and director of photography.”

One would imagine that being signed to the second largest MMA promotion in America would help bring stardom, but Lopez does not put importance on fame.  Even in her personal life, Daniel Moncada, her long-time boyfriend of Breaking Bad fame, is admittedly the more noticeable of the two.  But while she’s not overly concerned with becoming a huge star immediately, she is looking to use the platform that professional MMA success would bring.  “The bigger the platform, the more positivity you can spread.  For me, that’s the way that I think about it.  If you have a message and you want to get that message out there and be positive and inspire other people, you need to do amazing things.”

Part of overcoming any ordeal, like injuries and layoffs, is having a positive outlook.  But in times where she needs support, Lopez is quick to turn to her family.  So much are they in her corner, that Lopez compares them to her coaches and training partners as people who prepare her for a fight.

“My older brother is always there for me when I need to chat about something or I’m having a bad day.  My mom’s always there to girl talk about stuff that I can’t talk to anybody else about.  My little brother helped me for a lot of years.  My Dad’s really proud of me.  They’ve been there for every break, every bone, and every fight.”

At the end of the day, she will still have to overcome an opponent on fight night.  Paola Ramirez carries a modest record of 1-2, but her striking background has pegged her as a stern test for the returning Lopez.  “I think she’s a great opponent.  Very tough.  I’m looking forward to the challenge.  I know she’s gonna be good.  I don’t think you would want a fight to be any other way.”

Kristi Lopez will face Paola Ramirez on the undercard of Bellator 201 on Friday June 29. 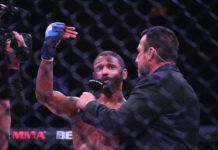 Bellator 207 A Night for the Unknowns 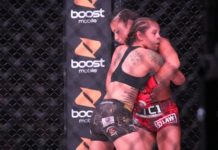 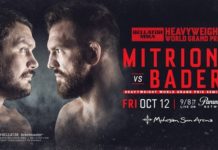