Ring rust is real, or at least is seemed to be as Kristi Lopez got back in the cage after over a year away, only to be tagged in the first then taken to decision.

Uncasville, CT — Kristi Lopez was back in the Bellator cage for the first time in over a year at Bellator 207 on Friday night in Unvasville, CT. The flyweight prospect, 2-0-1 in her pro career to date, had been expected to fight over the Summer, at Bellator 201. However, a badly blown weight cut by opponent Paola Ramirez put the kibosh on that fight, one Lopez had absolutely been looking forward to. That left her out another handful of months, a lifetime in MMA terms, where ring rust can creep in ever so quickly (unless, of course, you’re Dominick Cruz).

Opposite Lopez at Bellator 207 on Friday night was Sarah Click, a 1-2 fighter who had previously competed in Invicta. Click held a deceiving record, given her wealth of amateur experience. And she proved more than happy to stand toe-to-toe with Lopez. At the end of the first, as Lopez began lighting Click up, showing impressive accuracy with her hands, Click returned fire, tagging one of Bellator’s favorite daughters and finishing off the sequence with a high kick.

That shock at the end of the first round seemed to carry throughout the remainder of the fight. Lopez, who had arguably been in control until that point, was pushed back.

By the third round Kristi Lopez was on the outside, looking to counter as Click led with her jab. Click walked her opponent down as ‘Loba’ made sure to never stop moving side-to-side. When Click swung for the fences with an overhand, Lopez simply wasn’t there. With two minutes to go, Lopez found herself fighting to get her back off the fence, finally getting her underhooks in and turning Sarah Click. Click showed her appreciation with about a half-dozen knees in the clinch. One final break from the ref, a final thirty seconds out in the open (at least to start), and they’d gone the distance.

On the judges scorecards, the only surprise was that Lopez didn’t manage to steal at least one round. Click took all three 30-27.  If there’s a lesson to be learned, it’s that ring rust is real, and no matter how marketable or favored a fighter, there is no sure thing in MMA. 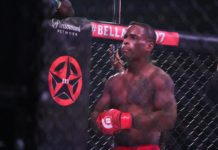 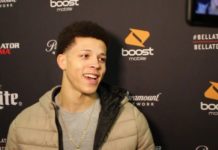 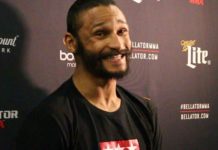