The NYSAC strikes again, as Jessica Aguilar has been removed from UFC Utica at the eleventh hour.

Scratch one from tonight’s UFC Utica card. With barely an hour to go until the start of the event, the much maligned New York State Athletic Commission opted to pull Jessica Aguilar from the event. She had been scheduled to face Jodie Esquibel in the featured preliminary fight on UFC Fight Pass. Per a report from MMA Fighting, the NYSAC cited a medical issue that came up earlier in the week, for which they required Aguilar to obtain a doctor’s clearance.

Despite getting that clearance, however, the NYSAC opted to pull the plug anyway.

While the commission would not comment on the nature of the medical issue, Aguilar was more than happy to give her side. The “medical condition” was, according to the fighter, nothing more than chapped lips. “NY commission is horrible and don’t understand everything we go through to make it here,” Aguilar was quoted as saying. “It’s absolutely crazy and heartbreaking.”

There’s some speculation the commission may have been concerned about dehydration, as weight cutting continues to be a hot button topic in the sport.

The fighter later retweeted a photo provided to MMA Fighting’s Ariel Helwani picturing herself and Esquibel back stage in Utica. It appears both women are game to rebook the fight as soon as possible. No doubt somewhere other than New York, where the athletic commission has quickly amassed a questionable track record in its brief time overseeing MMA events.

Here’s a photo, taken moments ago and provided to me by Aguilar, of Aguilar and Esquibel backstage. She said they both agreed that they want to re-book the fight ASAP. They were already at the venue when they got the news. pic.twitter.com/Wa2Pf6CIps

Update, 9PM EST: Aguilar updated fans on the situation via her Instagram, noting it was concern over a possible infection that scared the NYSAC, despite a doctor clearing her to fight. 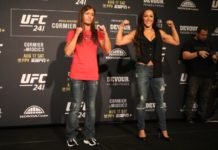 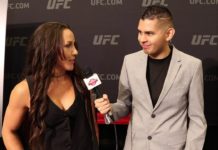 Back Against the Wall or Not, UFC 241’s Jodie Esquibel Treating Cifers Fight Like Any Other 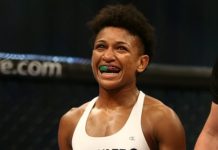