Every fight has a story, and for Belal Muhammad at UFC Utica, it’s going through yet another training camp while still observing the holy month of Ramadan.

Nearly every contest on UFC Utica’s 13-fight fight-card has a compelling story line. Whether it’s the headlining bout between Jimmie ‘El Terror’ Rivera and ‘Magic’ Marlon Moraes or the first fight of the night on the early Fight Pass prelims, Jose ‘Shorty Torres vs Jarred ‘The Monkey God’ Brooks, Utica is in for a memorable night. Adding to the night’s intrigue is Belal Muhammad.

Belal ‘Remember The Name’ Muhammad will make the walk to the octagon for the seventh time on Friday night. However, this is the third fight camp Muhammad has endured while observing Ramadan. “Yea its kind of crazy,” the Roufusport fighter told Cageside Press regarding the timing of his last three fights.

“At the end of the day a fight’s a fight. It really doesn’t matter who it’s against.”

“I’ve had three camps to get used to it now, so I have a routine down, it doesn’t bother me at all. Its really just timing,” he told us, adding that “I was out for five months with an injury and the first call I got for a fight I took and here we are.”

The call Muhammad received was for a fight with Niko Price. Price has since been removed from the fight due to an injury, so in steps promotional newcomer Chance Rencountre. “It doesn’t make a difference to me,” Muhammad told Cageside Press regarding his opponent switch.

“At the end of the day a fight’s a fight. It really doesn’t matter who it’s against. I believe I train with the best guys in the world at Roufusport, so I’ve been getting a ton of looks and I’ll be ready for whatever.”

Muhammad has long been a mainstay at the Milwaukee-based gym, and he wouldn’t have it any other way.

“Some gyms will have two hundred guys training and they might have one or two UFC fighters there. We have a small core group of guys and we are all elite fighters.”

Muhammad added, “We don’t just let anyone come down and train with us. You have to mesh with us, you have to fit in. We have a lot of guys come here and stay for a week and leave.”

Jarred ‘Flash’ Gordon must have checked all the boxes because he is the newest UFC fighter to pack up and head to the Midwest’s premier MMA gym. “Jared is actually my roommate,” Muhammad told Cageside Press.

“Jared is a good dude, he is a hard worker and he fit right in here from day one.”

UFC Utica is chalk full of compelling story lines. Despite not being on the main card, Belal Muhammad plans on putting on a show and the New York faithful will most definitely ‘Remember the name’. 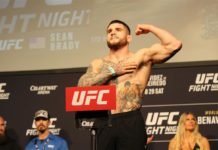