Former UFC Heavyweight Champion Frank Mir returns to action tonight at Bellator 198 after completing a 2-year USADA suspension. His opponent, ‘The Last Emperor’ Fedor Emelianenko is looking to bounce back from a loss to Matt Mitrione back at Bellator: NYC last June. The winner will advance to the next round of the Bellator Heavyweight Grand Prix.

For those of you that don’t know — Dillon Danis is a loudmouth submission grappler who has a connection to Conor McGregor, and as a result — he gets the star treatment and Bellator is hoping he turns into a real star. Hell, Danis is the one that bailed McGregor out on felony charges when Conor threw that dolly through a bus window and ruined a large part of UFC 223 earlier this month in Brooklyn.

Most people here, including myself are hoping Danis gets put out in violent fashion, but that’s really his role, he’s a traditional chickenshit pro-wrestling heel, and I sure respect that.

Despite being an accomplished BJJ practitioner, Danis will be making his MMA debut tonight.

Big John McCarthy and Mauro Ranallo are at the announce table tonight.

Early on Danis at a few shots before he was able to take the fight to the ground just after the one minute mark of the first round, that’s where he’s most dangerous — even from his back.

Danis starts to look for a leg lock at a relaxed pace, and this is already oddly reminiscent of a snake that’s already got ahold of its prey. There hasn’t been any damage inflicted yet, but it’s imminent. Danis slowly starts to work Walker’s leg and ends up locking in a toehold for the quick tap. That’s what Big John called it now, but I’m sure we’ll have an official fancy for the actual hold soon.

Winner by Submission at 1:38 of the first round: Dillon Danis

“This is another level,” Danis tells McCarthy about his submissions. He’s not wrong.

Great opening main-card bout, but now that means we have to sit through extra promos…

Round 1:
There’s a real problem with MMA with grapplers and wrestlers forgetting what ‘got them to the dance.’ That is, they forget what they’re skilled at and simply try to strike with better strikers.

Big John actually spends about a minute talking about Gracie’s superb striking compared to the other Gracie family members at the beginning of the round, but I’m not buying it. Nieman Gracie needs to grapple to win this fight. He didn’t take much damage on the feet, but they weren’t butterfly taps, either.

Nieman Gracie gets the fight to the ground twice in the first frame and unsurprisingly gets the better of Torres on the ground, where it was never in question that he would be the superior fighter.

Round 2:
Gracie pushes the Torres against the cage and a significant amount of time there before eventually getting the fight back to the ground.

Javier Torres is in real trouble off of his back. He’s not eating many hard shots from the top, but he’s constantly in danger of getting himself submitted.

Gracie achieves full-mount and transitions into an arm triangle just past the 3-minute mark of the second round. Gracie easily passes over Torres’ legs and once he shifts his weight towards the neck, it’s over.

Winner: Nieman Gracie at 3:18 of the second round via Arm Triangle.

Gracie tells Big John during his post-fight interview that there is no pressure in being a Gracie – all of that was taken care of in the early days of the sport, but he apologizes to his master for missing a leg lock earlier in the fight.

Gracie is now 8-0 with SEVEN submission wins. Gracie should definitely improve his striking game, but never use it in fights. Nieman Gracie should be the reverse Justin Gaethje.

Paramount Network just doesn’t sound right still. /perəˌmount/
What an ugly, ugly name for an often sought out network. Have you ever asked a bartender/server to put ‘Paramount Network’ on the TV? Good luck.

Round 1:
Lovato Jr. goes for an aggressive flying knee early on and ends up essentially pulling guard once it half connects. Once Rafael’s on the ground, like the previous two elite BJJ practitioners that fought before him, he looks eerily comfortable. That’s exactly where he wanted to be in the first place.

Gerald Harris is already in trouble.

Lovato Jr. controls Harris’ body and goes for a triangle choke before performing a slick transition into an armbar for the quick tap.

Sam Sicilia won his Bellator debut in December after dropping three straight in the UFC – let’s see if he can keep his Bellator undefeated streak alive in his second outing.

Emmanuel Sanchez is a grizzled Bellator veteran that has fought Bellator’s best featherweight names. This won’t be an easy second fight in the organization for Sicilia.

Round 1:
Apparently Bellator has monitors backstage because Sanchez tried to get on the leg lock train after the fight found its way to the ground in the opening minutes.

Sicilia works his way back to his feet, but Sanchez jumps up on Sicilia’s back before trying to drag him to the ground, but to no avail.

Now Sanchez locks in a standing arm triangle and then Sicilia eventually succumbs and falls to the floor! Sanchez has it locked up tight now – and that’s it. Sicilia has had enough and taps out.

That makes it nine wins for Sanchez inside the Bellator cage.

Pitbull vs. Weichel 2 for the Bellator Featherweight strap goes down on July 14 in Rome, Italy, and Sanchez is ready for his shot at the winner.

Another quick fight in the books, ladies and gentlemen.

It would be pretty cool if Frank Mir made this full sweep for the BJJ guys.

The winner of this fight will face Chael Sonnen in the next round of the opening Grand Prix – and for what it’s worth, Chael wants to fight Fedor.

Big John believes Frank Mir will win if he does the right things. Mauro remains neutral.
John McCarthy tries his hardest to convince us/himself that Frank Mir was wronged by USADA. I’m not buying what he’s selling, but, just know that there is a large part of the fan base that thinks that’s true now. All however many views this does.

Round 1:
Mir tries to impose his will early on but Fedor’s not having any of it and in a schoolboy scuffle Fedor pushes Mir back.

Both men reset and stand toe to toe.

Fedor lands a hard shot and sents Mir face first onto the canvas. Fedor is landing Dan Hendersonesque punches on a rocked belly-down Mir. Mir is probably already out at this point but eats another dozen shots as Mike Beltran can’t navigate the cage at this very moment for some reason, hesitating, hesitating, hesitating… okay that’s enough… Beltran officially calls it. He really wanted to give Mir a chance there.

Winner: Fedor Emelianenko via TKO at 48 seconds of the first round.

That’s a tough loss for Frank Mir to suffer, but he’ll be just fine if he can rebound in his next fight – though Bellator is putting together quite the heavyweight roster. I expect Mir to return around December, at the earliest.

Chael Sonnen enters the cage and cuts a promo about how he’ll get knocked out really quickly by Fedor when they meet. Yes, really.

Fedor wasn’t even paying attention. Not like he speaks English in any case, but it could’ve been better.

It’s also not a pretty sight to see someone cutting a promo while another man is holding the microphone, it just doesn’t work. He couldn’t freely maneuver and lock eyes with Fedor like he would have otherwise.

Chael’s at the booth after the fight cutting a better promo now to fix that blunder.
Felice Herrig, a UFC veteran in the women’s strawweight divison, is featured immediately after Bellator’s event goes off the air on American Ninja Warrior. That’s no accident. Herrig immediately fails the course because she tries to go through the course too fast. No link to that, unfortunately.

That was a fun night of fights with a string of submissions and a violent KO by one of MMA’s legends that just refuses to die. 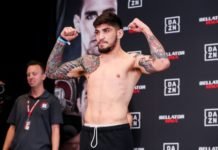 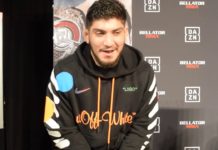