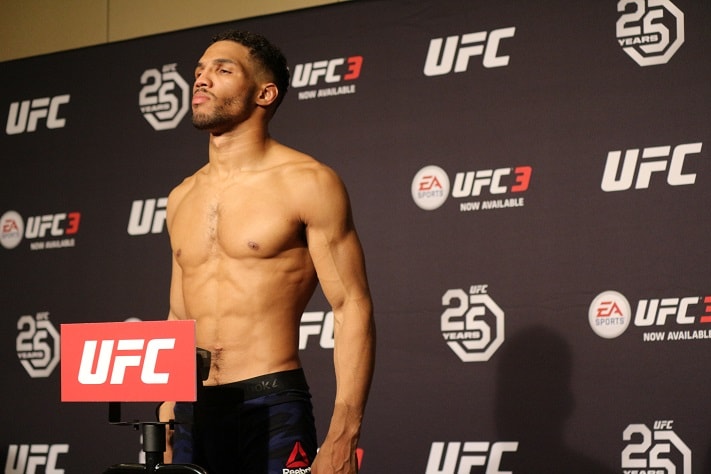 The Octagon returns to the east coast after their disastrous last visit in Brooklyn, but UFC Atlantic City has reached fight night smoothly and Cageside Press is ready for action.

UFC Atlantic City is headlined by a great lightweight battle between top contenders Edson Barboza and Kevin Lee. Given the mess at the top of the division at the moment, the winner of this bout could receive a shot at gold next.

Kevin Lee has been wildly successful in the UFC, owning a 9-3 Octagon record with four and five-fight win streaks. The latter was snapped in his most recent appearance, a come-from-behind submission victory for Tony Ferguson that earned him the interim lightweight title. Edson Barboza has also seen his fair share of success, with a 13-5 record that includes wins over Beneil Dariush, Paul Felder, and Gilbert Melendez. In this striker vs. grappler matchup, all of Cageside Press picked the wrestler Kevin Lee.

Frankie Edgar was knocked out a little over a month ago, but that won’t stop the all-time great from fighting in his home state of New Jersey. He’ll look to win the rematch against Cub Swanson, who, like Edgar, is attempting to rebound from a loss to top contender Brian Ortega. All but one writer sided with the former champion Edgar.

A heavyweight scrap will take place in the middle of the main card with Justin Willis taking on Chase Sherman. Willis has impressed in his two UFC victories so far, with one of them being a first-round knockout. Sherman has had his ups and downs, losing his first two Octagon appearances, then winning in his next two. He will be heading into UFC Atlantic City coming off a loss, but still got the majority with six of nine writers picking him.

A great middleweight bout between David Branch and Thiago Santos is on the main card. After an unbelievable 10-0 run in WSOF in which he won titles in two divisions, Branch has started his second Octagon stint at 1-1, defeating Krzysztof Jotko and falling to Luke Rockhold. He’ll take on Brazilian dynamo Thiago Santos. Santos absolutely crushes opponents with a 9-3 Octagon record and eight knockouts. Santos is on a four-fight KO streak, but Cageside Press is split down the middle with this one.

Brett Johns is a former Titan FC champion who has started his UFC career at 3-0 including a brilliant calf slicer against noted grappler Joe Soto. Aljamain Sterling is a great grappler who’s had his ups and downs with a 6-3 Octagon record. He’ll be looking to recover from a quick knockout loss to Marlon Moraes, and all but one writer believes he’ll have his hand raised.

Jim Miller is a respected veteran making his 29th Octagon appearance at UFC Atlantic City. He’ll be taking on New Zealand’s own Dan Hooker, who’s strung together consecutive wins for the first time in his Octagon career after moving up to the lightweight division. While this bout is in Miller’s home state, Cageside Press is just about split down the middle.