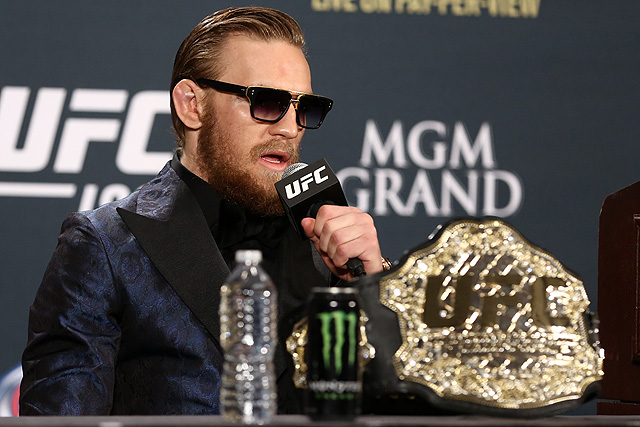 Conor McGregor was still fighting on free television at UFC Fight Pass in 2015, but he left those days behind forever at UFC 189.

It seems so silly now, with commercials for Beats by Dre and Burger King, but Conor McGregor was once just an upstart in the UFC’s ranks.  He was a popular fighter who could talk the talk and walk the walk, but a superstar he was not.  That is, until he entered the cage at UFC 189 on Fourth of July weekend in 2015.  The MMA world shined brightly that night, but anyone will tell you that everyone tuned to see “The Notorious” complete his ascension into a bonafide star.

Conor McGregor was still fighting on Fox Sports 1 and Fight Pass in 2015.  His charisma drew crowds and his ability to separate opponents from consciousness with ease made him a fan favorite.  But even his launch into stardom needed time, especially after he lost a year of his career due to a torn ACL in 2013.

It is said that things are meant to happen the way they’re supposed to.  That may well have been the case with McGregor at UFC 189.  After champion José Aldo had run through the featherweight division for years, McGregor was the rival the Brazilian champion had long needed.  Aldo finally had an arch-nemesis that was bringing the kind of attention that had long eluded him throughout his career.  When they were finally set to meet in 2015, the pre-fight antics did not disappoint.

The two embarked on a World Tour, the first of it’s kind for any bout in UFC history.  At every stop between Brazil and Ireland, McGregor and Aldo electrified the MMA world.  The moments were priceless: McGregor taking the belt from Aldo at the dais or butchering his picture with darts before ripping it in half and swallowing it in front of the Brazilian crowd.  The fight sold itself a thousand times over leading up to that July night.  There was just one problem: the fight didn’t happen.

Aldo would pull out within two weeks of the bout with an injury.  But McGregor’s popularity would not be denied.  The Irish fans showed up in force in a way few nations ever had abroad for an MMA fighter.  There was no question, UFC 189 was the Conor McGregor show.  Even from the opening bell, it felt as if the sheer will of his fanbase alone would bring him the victory.  Even the pageantry of the night was unique, with live music for the first time accompanying fighters to the cage.  McGregor survived a strong first round from late replacement Chad Mendes, but he would go on to annihilate a tired “Money” in the second to win interim featherweight gold.

It was an iconic victory in a career now loaded with them.  But the lasting impression of the fight wasn’t just the talk or the skills, it was the whole the knowledge that the public had just seen a star reach the stratosphere before our eyes that night.  He would go on to knock out Aldo six months later to end a decade of dominance in a breathtaking 13 seconds.  It was his crowning professional achievement, but even the most ardent fan would argue that it did not possess the novelty or magic that UFC 189 did.

Fans were spoiled that night. Just minutes before McGregor and Mendes walked out to the cage, they also witnessed one of the best fights of all time when welterweight champion Robbie Lawler collided with Rory MacDonald.  The fight was so exciting that it was voted by fans on ESPN as the greatest fight in UFC history.

Both men went back and forth, with Lawler asserting his will in the first two rounds.  In the third and fourth, MacDonald clawed his way back into the bout through blood and bruises to even the fight on the judge’s scorecards.  However, he had sustained an incredible amount of punishment in the previous 20 minutes.  When Lawler began to turn it on in the fifth round, it was too much for MacDonald who collapsed from the accumulation of damage.

It was a fantastic night of MMA, even if you did not know it at the time.  Future champion Cody Garbrandt would score a knockout on the prelims in only his second UFC outing.  Current featherweight contender Jeremy Stephens would add to his list of finishes with a TKO victory minutes before the war between Lawler and MacDonald.  Yet most of all, McGregor captured the MMA world within his grasp.

The UFC has tried annually to make the Fourth of July card the Super Bowl of the MMA world.  But one thing that’s been determined is that no amount of promotional backing can truly make a card special.  For that to happen, it takes the right stars, in the right match-ups, and in the right storylines.  UFC 189 had all of the ingredients, and as a result is remembered as one of the most genuinely fun nights in MMA.