UFC 222 is in the books and waves were made in several divisions, most notably in the men’s featherweight division. So who should the winners fight next?

UFC matchmakers Mick Maynard and Sean Shelby do a wonderful job putting together captivating cards from top to bottom with consistency. So now, we’ll try to predict their next moves using the biggest winners of UFC 222.

The women’s bantamweight division is very thin on contenders and coming into UFC 222, the winner of the main card opener between Ketlen Vieira and Cat Zingano seemed primed for a shot at gold. Vieira utilized her wrestling to get by the tenacious Zingano, who made a comeback effort in the third round. With the split decision victory (should have been unanimous), Vieira stays undefeated at 10-0 with three wins in the UFC.

Champion Amanda Nunes and Raquel Pennington will throw down in the main event of UFC 224 and Vieira should be next in line. However, if Nunes defends successfully, we could see her leave the division temporarily to participate in a superfight with featherweight champion Cris Cyborg. If that happens and Vieira is unwilling to wait, the other top contenders she could face at 135 are Marion Reneau, and Julianna Pena (who was out of action while pregnant, but recently returned to the gym).

Andrei Arlovski has reached two wins in a row by repeatedly taking down the Skyscraper Stefan Struve. Buyer beware though, a five-fight losing streak preceded his current run. Therefore, he should get the man who will fall out of the title picture in two weeks when Fabricio Werdum and Alexander Volkov battle at UFC London.

A bout with Werdum would be a rematch of a fight that happened in the Octagon 11 years ago, and would be a good test to see where both stand in 2018. As bad as this sounds, Alexander Volkov would be using Arlovski to bounce back if they crossed paths. Either man would make sense, just please don’t feed him to Tai Tuivasa next.

While O’Malley may have been the beneficiary of poor decision making by his opponent Andre Soukhamthath, he put together a strong performance on the feet and kept the hype train rolling. That train lost a wheel late in the third round though as O’Malley suffered a rough-looking leg injury, so he’ll be out for quite a bit.

Tom Duquesnoy, a top prospect from the United Kingdom, will be fighting Terrion Ware (who’s fought Cody Stamann, Sean O’Malley, and now Tom Duquesnoy in the Octagon, rough) at UFC London in two weeks. Win or lose, the Sean O’Malley fight makes sense. If he loses, the UFC can play the angle of O’Malley being brought up slowly, and if he wins it will be a battle between two top prospects on the brink of making the next step. The only drawback is that Tommy Dukes would have to wait for O’Malley to heal up.

Brian Ortega’s run is simply unbelievable. The undefeated featherweight has finished all seven of his UFC opponents and shocked the MMA world when he knocked out the unstoppable Frankie Edgar. It took 29 fights for someone to beat “The Answer” without needing the judges to tally scores, and this jiu-jitsu expert did it with strikes in under five minutes.

Ortega is the only man champion Max Holloway can fight next. While it is sad to see Edgar’s run come up short due to multiple injuries, a fight between Max Holloway and the ever-improving Brian Ortega gets the blood pumping.

As a champion of a division with a total of zero other fighters, predicting Cyborg’s next fight is fairly simple. If Amanda Nunes beats Raquel Pennington, make the fight that was being negotiated before UFC 222 needed a main event. Of course, this would spoil plans for the aforementioned Ketlen Vieira but Cyborg needs to fight somebody. If something does go wrong though, Megan Anderson is a solid backup plan.

Update, 4:50 PM ET — Juliana Pena is in fact back in the gym. Our apologies for the original error stating she was still on the sidelines. 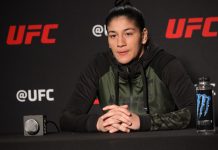 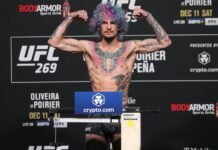