Before Cris Cyborg attempts to defend her title in the main event of UFC 222, three fights will take place on UFC Fight Pass.

Jordan Johnson and Adam Milstead throw down at light heavyweight, Bryan Caraway returns against promising bantamweight Cody Stamann, and Mike Pyle will ride off into the sunset against Zak Ottow. All three of these fights take place at 6:30 p.m. EST on UFC Fight Pass to kick off UFC 222.

Mike Pyle’s career has not ended gracefully, losing four of his last five fights including three knockout losses. The one win was a surprising upset knockout against Sean Spencer which earned a Fight of the Night award. Zak Ottow has split his four UFC appearances, going to a split decision in the first three. Prior to signing with the UFC, Ottow had 10 submission victories and had finished 12 of his 13 career victories.

Cody Stamann is a promising bantamweight with a 16-1 record, including a win over hyped prospect Tom Duquesnoy. Bryan Caraway currently resides at seventh in the bantamweight rankings, and has been falling due to inactivity. Caraway has fought and won twice since 2015, and even had a top-five ranking before pulling out of two scheduled bouts.

To kick things off, Adam Milstead moves down to light heavyweight to battle Jordan Johnson. Milstead has finished all eight of his career victories, and is 1-1 in the UFC. However, the loss to Curtis Blaydes was overturned after Blaydes tested positive for marijuana. Having overcome the knee injury suffered in his last bout, Milstead is ready to bounce back at UFC 222. Johnson is an undefeated wrestler from the University of Iowa. Johnson is 8-0 with two wins inside the Octagon.

Below will be recaps of each fight, so keep checking in to see the results!

Milstead popped a jab to start the fight, and followed with a combination. Johnson attempted to throw back but wasn’t finding success. Milstead swung heavy hands at Johnson, but none landed truly clean. Milstead waited for a Johnson jab and landed a nice pair of right hands to counter.

Johnson started the second round with a stiff jab. Johnson looked much better on the feet in the second frame, mixing in body shots. Milstead lost his balance temporarily, and Johnson took advantage by pushing him to the fence. Milstead had the strength to resist the takedowns of Johnson, including a single leg attempt. Milstead threw a trio of punches behind the ear of Johnson and the fighters were broken up shortly after.

Johnson was caught on the feet, but he rushed in and got a takedown, taking the back of Milstead. Milstead was able to stand and Johnson kept him pressed against the cage until a referee separation. Johnson landed a jab and the round ended shortly after.

An exchange of hooks started round three, then Johnson shot for a takedown and Milstead threw him off quickly. Milstead was going for the kill, but Johnson was defending well, shooting for a takedown again which was unsuccessful. An overhand right landed for Milstead, then he was caught with a check left hand.

Johnson threw a jab then drove Milstead across the Octagon with a deep single that led to a takedown. Milstead was able to eventually stand, and landed heavy shots as Johnson clinched him against the cage. With little time left, Milstead separated and threw some more haymakers to end the fight.

Caraway went in with a combination after a tentative start to the contest, then shot for a takedown and somehow didn’t bring him down with a deep single. Stamann landed a hard right hand, but Caraway was right back in on the takedown effort.

Stamann separated and pushed the pace, but Caraway used his aggression to land a takedown. Caraway fought through the butterfly guard of Stamann. Caraway pinned an arm down with his leg after stepping over the head of Stamann, then attempted an armbar as time expired.

Stamann was popping Caraway on the feet to start the second round. Caraway dove in for a takedown but it was stuffed by his opponent. Caraway landed a jab and then a few clinch uppercuts. Stamann stuffed a takedown then landed a hard hook.

Caraway got on the offensive again, limiting the space of Stamann. Caraway was unsuccessful with a takedown, and Stamann made him pay with a hook and a two-punch combination. Caraway kept going for takedowns to end the round, but nothing came to fruition for Caraway.

Caraway started the third round with a few kicks, and Stamann started to turn it up. The hooks kept coming from Stamann as Caraway attempted to answer with leg kicks. Caraway was able to push Stamann against the cage, but Stamann escaped after about a minute of control.

A sneaky left landed for Caraway, then a weak takedown effort. Stamann was landing with consistency, so Caraway just pushed forward with no regard for defense. Both men were connecting and Caraway shot for a pair of takedowns that failed. Caraway and Stamann both landed heavy from the clinch, and Stamann shot for his first takedown with little time remaining. Caraway attempted a guillotine and rolled him over but could not get the tap as time expired.

Zak Ottow moved in quickly with a few hooks, then a spinning back kick. Ottow was consistent with the jab, and began mixing in low kicks. Pyle landed a body kick and Ottow stayed on him. Ottow landed a low kick and landed a hard right that knocked down the veteran as Pyle was coming in. Ottow dove in and landed a barrage of punches on the ground, forcing the referee to call off the fight. 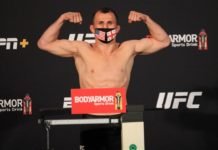