Zak Ottow is facing a wily veteran when he gets in the cage at UFC 222 against Mike Pyle — but that’s a position he has been in before, and he sounds more than ready.

UFC welterweight Zak Ottow is back in the octagon Saturday at UFC 222. There, he’ll be looking to bounce back from a loss to Li Jingliang when he meets 42-year old veteran Mike Pyle. Pyle, who recently announced that this will be his retirement fight, first fought as a pro in 1999, and served as WEC welterweight champion.

That’s an formidable opponent for anyone, but Ottow has faced wily veterans before. We spoke to him ahead of the event in Las Vegas this weekend, to get his thoughts on fighting Pyle, avoiding the perils of fighting overseas, and his take on Li Jingliang’s controversial eye gouge at UFC 221.

First up, though, we delved into Ottow’s Wall Street background. ‘The Barbarian’ from Milwaukee spent a year working with stock brokers, yet eventually chose to fight for a living. As Ottow tells it, it wasn’t as if he simply chose between face punching and trading stocks, but the latter simply wasn’t for him. “I’d made some connections, I went to the Air Force Academy for two years. After that, I didn’t want to just go back home and go to state school,” he told Cageside Press. “I kind of used some of the connections I made out there to take up a job that was pretty much right there for me, working as an assistant to some stock brokers. They lived pretty high-stress lives, and although they made a lot of money, it seemed like they didn’t really get to enjoy it very much. Real highs and lows, which is a lot like fighting, but real day-to-day highs and lows. Long hours, I was away from home, and you had to be quite the salesman and stuff like that to do that job. I just didn’t think it was going to be for me in the long run.”

Working a paid internship, couch surfing to get by and practically penniless, Ottow was offered a job at the end of it. “But I pretty much had no more money left in my bank account,” he told us. He moved in with his brother back home, and “I didn’t even have a dollar to my name.”

Rich Franklin was a math teacher, Zak Ottow worked in the stock trade. The backgrounds of mixed martial artists can be a curious bunch.

Last time out, Ottow took on Li Jingliang, on the Chinese fighter’s home turn in Shanghai. The fight didn’t go Ottow’s way, and that made him an interested observer of ‘The Leech’ in his controversial fight against Jake Matthews at UFC 221. “I did watch the fight,” he said, “obviously paying attention to everybody in the welterweight division, but especially those that I think I may fight in the future, or that I have fought in the past.”

The foul, Ottow said frankly, “was pretty blatant. It wasn’t an accident or anything, I was very surprised that a point wasn’t taken.” As Ottow saw it, it definitely helped the Chinese fighter escape the submission he was trapped in.

Ottow saw the Matthews fight as going how he had planned to fight Li last November. “A lot of rolling after the punches, because Li likes to throw the counter hook especially,” he explained. Matthews tended to “lead a lot with the cross instead of the jab, and he’d roll underneath the counter hook and throw two more shots after, which was a very similar game plan to what I had. And he also kept the level changes with takedowns coming, and then level changing coming back up with strikes.”

‘The Barbarian’ watches past opponents, not just because of the possibility of a rematch, but because “it kind of helps give me a little confidence booster, if I see people that I fought and did well against, or fought and lost to, if they’re doing well. It helps just mentally with me as well.” Plus, every fight is a learning experience, and “you definitely tend to learn more with the losses.”

“It’s kind of hard to teach an old dog new tricks, I think with the last couple years, Mike is kinda set in his ways.”

Zak Ottow is highly motivated to get back in the win column come Saturday, and opponent Mike Pyle brings a little bit of deja vu with him. Ottow was in a similar situation, fighting a rugged veteran in Josh Burkman when Ottow made his UFC debut in October 2016. “Yeah, it does feel like a little bit of deja vu,” he answered when asked about the similarity. “You know a guy that’s got some credentials outside of the UFC, but also a ton of UFC fights. Been around a long time. Him and Burkman were both guys I was fans of coming up when I started training in MMA, and it’s a pretty cool experience to get a chance to fight these guys.”

It also gives him a chance for another big name on his record, or as Ottow put it, “it’s a good little feather in your cap. But also at the same time, it’s kind of hard to teach an old dog new tricks, I think with the last couple years, Mike is kinda set in his ways, so it’s a little easier to prepare for.”

Which isn’t to say he doesn’t respect the veteran. “He’s got a good active guard, if I’m in the guard I have to be real diligent and mind my Ps and Qs, and make sure that I’m not getting myself out of position” Ottow explained. Pyle “likes to attack kimuras, triangles, omoplatas and arm-bars and all that stuff. He’s got good speed off of the submission attacks. If I end up in top of his guard, that’s something I’ve been practicing and just being aware about. On the feet, he does a couple of things too, really likes to counter with the right hand, and counter with the knee. Really good in the clinch.”

But in the end, Ottow is confident on how this goes. “First round KO. I think with my movement, ability to switch stances, I’m going to be able to draw those hands out away from his face. Lately, it seems like he’s been having a harder and harder time taking the big shots.” And if the fight does go long, “I know I can play that chess match with him which I know he likes to do,” Ottow said.

“He’s not going to be able to keep up with me at his age, and after the year long-plus layoff” he finished, because “I’m coming in with a lot of motivation and refusing to lose.”

UFC 222 will mark the first time in four fights that Zak Ottow has fought on U.S. soil. And that’s a big thing for a fighter who has been thrown into the front lines in enemy territory again and again. “That was some of the best news I heard about the fight and everything,” he told us. “One of the first things was ‘okay where is it?'”

Fighting abroad has lost it’s allure for Ottow, it seems. “The first time you travel, it’s a cool experience. By the time you do it three times in a row, it’s a little old.” He’s glad to be back home, “just to break it up a little bit. Three times, right in a row, pretty much going and fighting the person in their home [town], it’s just nice to get one in the States where, not only do I not have to adjust to a new sleep schedule and time change, but just having access to all the food and water and stuff I need for my weight cut, it’s going to be great.”

The cost was also becoming a big factor. “I take three corners, they’ll [UFC] pay for you and one corner, but to bring the other two corners, for example, the New Zeland fight was short notice, they’re booking my flights three weeks out. So you can imagine, a flight to New Zeland, for two tickets on short notice, pretty expensive. And also the taxes – China took like 33% of my check right off the top.”

No travel, this time out, no problem. And despite the costs and hardships endured by pro fighters, Ottow isn’t entirely sold on any of the union and association efforts currently popping up around the sport. Instead, he sees the UFC as slowly moving in the right direction, in regards to fighter salary and insurance. “If I had been in the UFC just like, 16 years ago,” he pointed out, “I’m getting paid way more than those guys got paid.”

“As far as a fighter’s union and all that stuff, up until this point things have been pretty disorganized,” he continued. “It seems like some people are doing it for their own benefits.” For him to be interested, “there would have to be something that really is just in favor of the fighter’s benefits.”

Ottow also signed a new UFC deal recently, and despite coming off the loss to Li Jingliang, “I did get a little bump up.” That, combined with recent changes to the Reebok outfitting policy that sees newer fighters take home a little more money, has him happy.

And after the Pyle fight, Ottow is looking forward to fighting a little closer to Milwaukee, if not right there in town. “They made a June card in Chicago, I’m on the South Side of Milwaukee,” he said, not far from Chicago. “That would be nice, to fight in the United Center in June if I come out healthy [from UFC 222].”

“Other than that, there’s even been some rumors that the UFC could come to Milwaukee in September, or late August, and tie in with the Harley Davidson 115th Anniversary” he noted. “If I could get on a card close to home, that would be awesome.”

Don’t miss Zak Ottow take on Mike Pyle, this Saturday at UFC 222 in Las Vegas, NV. The fight goes down live exclusively on UFC Fight Pass, where it serves as the featured preliminary fight on the streaming service. 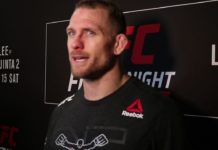 Zak Ottow Thrilled With Crowd Support At UFC Milwaukee, Glad He’s No Longer The Other Guy 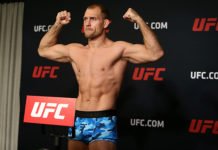 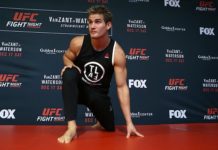