Jeremy Stephens continued his rise to the title at UFC Orlando with a heavy knockout over prospect Josh Emmett.

Jeremy Stephens has been around for a long time. In fact, he has as many wins in the UFC as Emmett has career fights. While the 14-13 Octagon record does not jump off the page, Stephens has put on the best performances in his career in his last two fights against Gilbert Melendez and Doo Ho Choi, and is now looking to make a run at the title.

Josh Emmett is a talented featherweight with just 14 career fights under his belt. Thus far, the Team Alpha Male fighter is 4-1 in the UFC and is currently on a two-fight win streak. Emmett stunned the MMA world when he knocked out perennial top-five featherweight Ricardo Lamas on short notice in December.

The fighters quickly met in the middle of the Octagon and exchanged feints until Stephens fired a straight punch. Emmett answered with a body kick and another. Emmett chased Stephens down with a combination but damage was avoided. Stephens countered an Emmett hook with a well-placed uppercut.

Stephens dug to the body during a combination and Emmett landed a kick below the belt in response. After a quick rest, Stephens was ready to go again.

Emmett flew in with a flying knee but only landed with a straight punch that followed. Both men went hard with combinations. Stephens caught Emmett flush with a pair of hooks, Emmett did the same. Then the turning point came when a huge right hand dropped Stephens. Emmett dove on top, but landed just one elbow while on top. Stephens stood quickly and avoided Emmett’s attack for the remainder of the round.

Stephens started the second round with a knee to the body quickly. After a body kick from Stephens, hooks whipped around from both fighters. A spinning backfist landed for Stephens as Emmett was along the fence. Stephens and Emmett stopped where they were to throw haymakers and Stephens landed harder, dropping Emmett. Stephens followed up with hard strikes on the ground and an elbow shut the lights off. Jeremy Stephens by KO.

With two straight knockouts over top prospects, Stephens begged for a title shot in the post-fight interview. 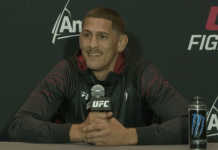 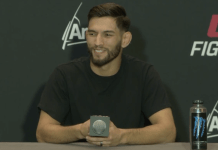