Jessica Aguilar will have to wait a little longer for a crack at her first UFC win.

After opponent Livia Renata Souza suffered an injury that forced her out of their scheduled strawweight fight, Jessica Aguilar is off UFC Austin. Though the injury to Souza happened several days back, the UFC opted not to announce any changes to the card. That, no doubt, was in hopes of finding a suitable replacement for the injured Brazilian. However, with no opponent being announced it appears the promotion is moving in a different direction. MMA Fighting were first to report that with the opponent search coming up lacking, Aguilar is off the card, numerically UFC Fight Night 126. The event takes place this Sunday.

With so little time to the event, expect the UFC Austin card to continue forward with twelve fights.

Aguilar (19–6), 35 years old, was at one point considered by many as the best strawweight in the world. However, while the UFC launched its 115lb weight class via The Ultimate Fighter 20, she was contracted to the World Series of Fighting. Since joining the UFC in 2015, she has struggled, losing both her fights to date. That includes her debut against Claudia Gadelha, and a follow-up bout at UFC 211 against Cortney Casey.

Livia Renta Souza (11-1), meanwhile, is a former Invicta FC strawweight champion. Her lone professional loss came to current UFC strawweight Angela Hill, who defeated Souza in Invicta FC to claim the 115lb title. Souza went on to rebound with wins in her next two bouts, and was expected to make her UFC debut in Austin.

Per MMA Fighting’s report, the UFC is looking to reschedule the bout, possibly at UFC on FOX 28 or UFC 222 over the next few weeks. 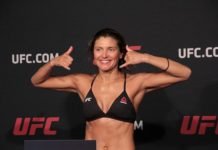 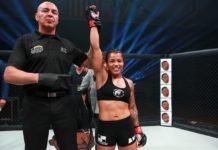 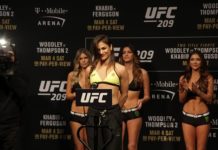