UFC 221 is merely a symptom of a larger disease: too many events, with talent spread too thin.

The UFC’s latest trip to Australia doesn’t feel like a PPV event. We’re told it is one, we’ve been sold on that fact because gold is involved. Title fights mean PPV unless they’re flyweight, right? But when you cook up yet another interim belt because the real title fight fell through and the card was thin to begin with, can you really justify a $5 price increase? The UFC sure hopes so. That’s right, UFC 221 will cost you $65 stateside, just like UFC 220. Though the promotion never officially announced the price increase, it looks like it’s here to stay.

It’s one thing to charge an extra five bucks for two title fights, it’s another to do it when in reality there’s no title fight at all. Just a number one contender’s match.

If you haven’t noticed yet, 2018 has been off to a sluggish start for the UFC. The year’s first UFC on FOX offering, UFC Charlotte, drew a paltry 1.59 million viewers. That continued a trend of declining viewership in 2017 for the big FOX cards, as UFC on FOX 26, the previous event aired on the broadcast channel, struggled as well. It raked in 1.78 million viewers. UFC on FOX 25 was in the middle, at 1.64 million, what was then a low for the series. UFC on FOX 24 last April brought in 1.74 million.

That no UFC on FOX card in the past twelve months has brought in above 2 million viewers is concerning. UFC on FOX 23 snagged just over two million in January 2017. This is impeccably bad timing for the UFC, whose television deal with FOX is set to expire. Word was, WME-IMG was banking on a big price increase for the U.S. broadcast rights to UFC events. With so few sports properties available, it is feasible there will still be an increase — but with numbers like these, the UFC is not likely to get the reported $450 million annually it was looking for.

That brings us to PPV. Even with two title fights, and the most anticipated heavyweight title match in years, UFC 220 in January didn’t fare all that well. With the buyrate reportedly around 350,000, those two title fights barely equaled Cyborg vs. Holm at UFC 219. That’s concerning for the UFC. What’s more concerning is that outside of Luke Rockhold and Mark Hunt at UFC 221 this weekend, there’s no proven draw on the card. With Rockhold fighting just once since 2016, on free TV no less, what pulls fans in to this card? All that glitters is not gold, and the UFC’s reliance on interim belts is transparent.

Yet this is where the promotion is at in 2018: not enough talent to justify the number of cards. In 2010, the UFC put on 24 events, an average of two per month. 2010 was a big year for the UFC, with the landmark UFC 100 featuring Brock Lesnar, Georges St. Pierre, and a young, pre-scandal Jon Jones.

The FOX deal kicked in in 2011, and the UFC merged in the lower weight classes from the WEC. The number of events started to climb, peaking in 2014. Remember 2014? It was not a good year. A massive amount of injuries, flagging PPV numbers, and UFC 176 cancelled.

The UFC learned from that year, scaling back it’s number of events from 46 to 41 in each of the subsequent two years. 2015 and 2016 where smash hits in comparison, with the arrival of Ronda Rousey and Conor McGregor as main event players. Yet things change fast in the MMA world; come 2017, Rousey was gone and McGregor was boxing. Even with just 39 events, there wasn’t enough star power to go around.

Then, the drop-off again last year. While 2017 wasn’t as bad as 2014, it was a close second with 322,083 as the average. The UFC decline was back in action. Why? Stars create buzz, buzz gets people talking, and tuning into events. What’s good for the goose — the McGregors, St. Pierres, Rouseys — is good for the gander, or more accurately, the rest of the roster and the UFC itself.

No stars? Everyone suffers. Too many events? They lack that special feeling, so why tune in, why pay? And so you come to 2018, with a dearth of bankable names. Still too many events for a roster that is bottom-heavy. UFC 221’s biggest name is Mark Hunt, who fights in the co-main event against the relatively unknown Curtis Blaydes. It’s not a fight fans were particularly screaming for, though that doesn’t mean it’s a bad fight. In fact, it could be pretty entertaining — but will that convince fans to shell out $65 a pop? Probably not. Same answer when you examine Rockhold vs. Romero with an interim belt on the line. Though it’s a fight many have wanted to see for years, it’s simply not floating a PPV.

The UFC recently saved UFC 222 by booking Cris Cyborg vs. Yana Kunitskaya in the main event when Max Holloway was forced off the card. Cyborg has been a solid draw for the company, and they made the right move there. Yet UFC 221 will not be saved by an interim belt no one considers real. The promotion would have been better off putting the show on FOX, quite honestly. But it can’t or won’t, and in 2018, the sad reality is that an overpriced, watered down PPV is what we get for the promotion’s debut in Perth. The buyrate will reflect that. 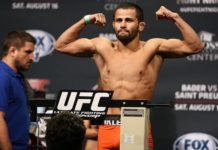 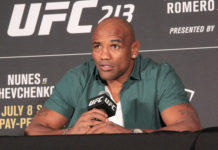