Jamie Thronton will be in action Saturday night at SCS 34, where she’ll look to capture the promotion’s 115lb crown.

Nicknamed ‘The Pretty Assassin,’ Jamie Thorton, an LFA veteran who previously got in the cage with Andrea ‘KGB’ Lee, returns to action Saturday night at SCS 34. There, she’ll clash with Morgan Solis in the co-main event, with the promotion’s vacant women’s strawweight title on the line. Currently 5-4 as a pro, including a win over Jaymee Nievara, Thorton recently bounced back from a three-fight losing streak with a win over Mercedez Campos. Now Thorton, ranked among the top 15 women pound-for-pound in Califronia, will lock horns against rising prospect Solis.

Prior to this strawweight title battle, Thorton took some time to answer a few questions with Paarth Pande of Cageside Press.

Paarth Pande: How did your journey as an athlete begin?

Jamie Thorton: As a child, I ran track and played a little basketball. Shortly, I was in College on a full scholarship running track and before I knew it, jumping out of planes in the 82d Airborne Division for the United States Army…… now MMA Fighter!

PP: Was there someone who influenced or inspired you? When you look back and realize how far you have made it, how does it feel?

JT: I feel good that things are coming together after 18 months of being a pro and 9 fights.  Rough times and really great times keep me going and going.  My husband inspired me and he gets more excited about me kicking someone than I do!

PP: Did people around you support the decision of taking this sport as a career? What are the biggest challenges that you have faced?

My closest circle was surprised and attempted to push me away verbally.  The biggest challenge is getting fights that are fair and equal to both fighters.  Normally, I am called in the last minute…… I accept the challenge just make sure the purse is right.

PP: You recently went on a three-fight losing streak. How did you manage to keep your confidence? What was the most difficult part of this low phase?

JT: Three fights at 125 lbs, dropped by me and not to mention two of which was on LFA.  Great way to learn yourself…..low phase is social media will remind you of those losses!  I’m undefeated at 115lbs, so I always concentrate on the things I do well.

PP: You take on rising undefeated prospect Morgan Solis. What are your thoughts on her?

JT: Much respect to Solis on stepping up to fight a very tough bout with me!

PP: You have moved down from flyweight to strawweight division. Why?

JT: I have not moved anywhere; strawweight has always been my weight class.  The issue is that fights at strawweight are not always available for me.  My first pro fight was on KOTC with one week notice and contract  3 days prior to the fight at 118lbs.  We always want to fight where I do not have to gain weight to fight.  I am a very small 125 so we [would] rather not fight there, if the conversation is right and the purse is right for the fight we are willing to fight as high as 145lbs. YOLO!!!

PP: An opinion which comes out, again and again, is that MMA isn’t meant for women. As someone who practices MMA, what are your thoughts on the thoughts of people who refuse to accept that women can fight too?

JT: Those people have the right to think and believe what they want.  No issue with me.

PP: You have been a part of the MMA world for some time now. What are your thoughts on the evolution of women’s MMA? Do you think that  female MMA fighters have cemented their spot in the mainstream media? Have you ever found it difficult to get recognition in MMA world because of being a woman?

JT: I have been a pro fighter for less than 2 years and I believe the evolution of WMMA is at an all-time high!  Women are proving every day that they can train and compete at the highest levels giving fans something to root for and when the fight is done…. [it] gives women the strength to go beyond the stereotypes! Women still have a way to go with mainstream media, but we are on the rise!  Scroll through social media and you will see more WMMA fighters than men.  I have not found it difficult to get recognition because I am in the middle of the pack right now, it is so many of us doing the same thing….winning some and losing some.  I find it a challenge being a black female pro mma fighter.  Going against that stereotype is painful in itself; time goes on……….and on…….

PP: Whom do you think are the top 5 greatest women fighters of all time, women who have not only given an exemplary performance in their fights but have also helped in the growth of the sport and have made it possible for women to have their place in some of the biggest MMA promotions? Why?

JT: This is a topic that is very difficult without me having the actual numbers in front of me. No order:

Gina Carano-the first woman I can remember who had skills of kicking and punching, she crossed over to movies prior to her giving the world women’s sex appeal in the fight game.

Ronda Rousey-the first woman to actually get my attention…while I paid for her pay-per-view fights.  She destroyed a entire division with an arm-bar. She crossed over to movies and magazines and became a social media everyday name.  Ronda has shown us all how to work social media and skill at the same time.

Fallon Fox-one of the first transgender female MMA fighters.  Proved you can be anyone you wanna be in this MMA World.

Shannon Knapp-not a fighter in the Cage, but more of a fighter outside the cage by giving woman a stage to show MMA skills.  Who would have thought about an all women’s promotion in such a male dominated sport. Shannon is the true hero of WMMA!  No she has not offered me a contract to fight yet.

Debra Clinton-no known cage fights, this woman has produced many women and men butt kicking throughout Leesburg, GA!  She retired after over 20 years in the Army and produced two young women. My hero, my Mother!

PP: Who is the best opponent you have ever faced? What made them the best you have faced?

JT: The best opponent so happens not to be someone I have fought before in an MMA Bout.  Surprisingly, its life all the way up to the fight….imagine having a military husband that is “high” maintenance, kids that always need direction so they are a great citizens and positive members of society, manager, trainer and sparring partner is my handsome husband (some nights he gotta sleep on the couch, when he piss me off in training), and then mother nature arrives during the weight cut….dammit……and I still make weight and have pretty nice training camps!

JT: No one truly knows what an average fighter pay is…..having said that fighters should be paid enough for training, management, and advertisement of the fighter’s brand.  What ever that looks like….Fighters Union would be great to ensure fighters get medical, retirement benefits and better pay.  MMA beats up the mind and body over time, all for the fans.  My husband has the long term plan for our family; I believe that I would support the Union.

PP: What is your message to everyone who wants to pursue MMA as a career?

JT: It’s always best to have many goals!  MMA as a career is possible for all; not everyone makes it to a point where this can produce good medical for the family, a retirement plan or even a paid off 4 bedroom house with over 3000 sq feet.  Surround yourself with WINNERS; when I say winners, I am talking about those who are good citizens and positive role models…….WINNERS at LIFE!  Have a plan B and C just in case this MMA Career doesn’t pay the bills. 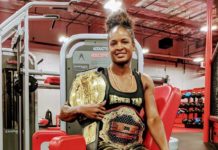