We spoke to strawweight prospect Jamie Thorton, who won the Sugar Creek Showdown title in her last contest with a first-round submission.

Jamie Thorton picked up a win at Sugar Creek Showdown 34 and improved her record to 6-4. With this win, she is now on a two-fight winning streak and moves her strawweight record to 3-0. Ahead of her next big move, she took some time off to answer a few questions.

Paarth Pande: In your last fight, you faced Morgan Solis. What are your thoughts on your performance? What are your thoughts on her as an opponent?
Jamie Thorton: I really felt good in there! My last two fights I have actually had training camps; I believe that’s a reason I have been so dominant in my last fights. Morgan’s camp wanted a title fight, so they got one. I’d like to thank her for taking the fight at 115 pounds.

PP: You were the underdog in the fight. Did that affect you?
JT: I was surprised I was the underdog. I don’t mind playing the role of spoiler. I should embrace that role.

PP: What are your next plans? Will you stick to the strawweight division?
JT: We are already in talks with a couple organizations on fights that make sense. Yes, I plan to remain at strawweight until something big is offered at 125 pounds (flyweight).

PP: In your last interview, you stated that you think Fallon Fox is one of the greatest female fighters of all time. Most say that trans-women shouldn’t fight women in combat sports. What are your thoughts on that sentiment?
JT: We all must understand that in today’s world, you can be anyone you want to be. It’s entertainment at the end of the day. There is a place for it, I just don’t know exactly where yet. I was joking about Fallon Fox in terms of her MMA accolades. Good luck to her.

PP: Fighters have time and again commented that they have faced some form of racial discrimination. A notion which has come out is that some MMA promotions don’t treat fighters of color the same way they treat white fighters. What are your thoughts on this? Have you ever faced such problems?
JT: There are promotions that believe that fans would rather see white women fighting than black women. It’s up to the ticket-seller, we understand that. Sure we have faced that racial drama already and it may happen again. Being a black woman myself, I want to be known for the “SCRAP” that I bring in the cage.

PP: MMA is notoriously known for being a negative sport. Some athletes have left the sport because of the draining negativity the sport has around it. Despite this, you have always managed to stay positive. How?
JT: MMA is known for a lot of things, we like to concentrate on the positive side of MMA.  Let’s face it, MMA changes lives! For some, fighting can purchase a house, and even start your own business. Fighting can produce the highest of all highs, but if you can, stay away from those lows. They hurt so bad, really bad.

PP: What is your message for people who find it difficult to deal with all of this?
JT: Our message would be: If you can’t handle the negative side of MMA, attempt to do something else within the sport that can give you a positive feeling and you can do it your way. For example, start your own podcast. 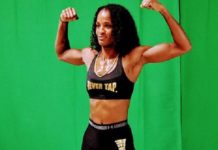