BJJ ace and MMA prospect Mackenzie Dern is about to jump to the UFC.

Mackenzie Dern’s Invicta FC stint didn’t last long. After just a single fight in Shannon Knapp’s all-female MMA promotion, Dern is jumping to the big show. According to a report by MMA Fighting, Dern will appear at UFC 222 in March. She’ll meet Ashley Yoder at strawweight in her UFC debut.

For the past couple of years, Dern has been one of the hottest prospects on the women’s side of the sport. The twenty-four year old is a multiple-time gold medalist in Jiu-jitsu. Among her accomplishments are gold medals at the 2015 and 2016 World Cup, the 2015 and 2016 World Jiu-jitsu Championship, and gold at the ADCC Submission Wrestling World Championship in 2015.

Dern (5-0) made her MMA debut with Legacy FC in July 2016, and stayed with the promotion as it merged with RFA to become Legacy Fighting Alliance. In late 2017, she made the transition to Invicta FC, making her promotional debut at Invicta FC 26 in December. After something of a sloppy standup war, Dern submitted Kaline Medeiros in the dying seconds of that bout.

Perhaps the biggest question surrounding Dern’s UFC debut will be weight. The submission ace has had struggles making the 115lb strawweight limit, though she weighed in successfully for her Invicta debut. Still, with the UFC introducing a flyweight division, and Dern having fought at 125lbs in the past, it will at the very least remain an option for future should strawweight not work out.

Ashley Yoder (5-3), meanwhile, has lost her first two UFC fights to date. She’s dropped unanimous decision losses to both Justine Kish and Angela Hill. Prior to those losses, she defeated Amber Brown at Invicta FC 20. 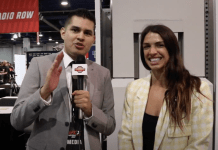 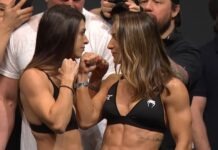