UFC Winnipeg is a man down, and minus a flyweight bout.

It seems as if UFC on FOX 26 has another victim of weight cutting on its hands. In Friday’s early weigh-ins, flyweight Peitro Menga failed to make it to the scales. As a result, his fight with former 125lb title challenger Tim Elliot has been pulled from the card. The UFC confirmed the news, reported by multiple sites including MMA Junkie, during the weigh-in proceedings. The event takes place Saturday in Winnipeg, Manitoba. Robbie Lawler faces Rafael dos Anjos in the welterweight main event.

The fight was part of the televised prelims on Fox Sports 1 (TSN in Canada), meaning a fight from the UFC Fight Pass preliminary portion of the card will be bumped up. The bout was to be Menga’s first in the UFC. He stepped in on short notice after Elliot’s original opponent, Justin Scoggins, dropped off the card due to injury.

The UFC later confirmed that Elliot would be paid his show money. The fighter, however, is hoping for more than that, campaigning for his win money to be paid as well.

@danawhite @Mickmaynard2 please make this right, I always show up, I always make weight, and I got a 2 year old kid to support. I did my job.

Thirty year old Elliot, a former Titan FC champ, won season twenty-four of The Ultimate Fighter. That earned him a title shot against Demetrious “Mighty Mouse” Johnson at the show’s finale just over a year ago. Elliot put on a good showing, but ultimately came up short, as so many others have. Since then, Elliot (14–8–1) has gone 1-1 in the promotion. He holds a win over Louis Smolka, but lost last time out against Ben Nguyen. In his original run in the UFC from 2012-2015, he went 2-4. 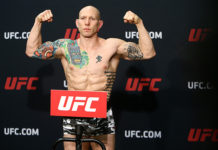 UFC Featherweight Josh Emmett: After Scoring One of the Year’s Biggest Upsets, Who’s Next? 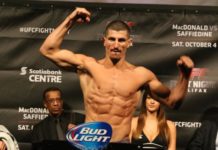 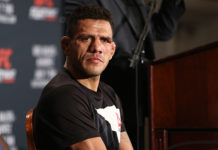