‘Mayday’ made no mistake at Bellator 191.

Michael McDonald finally made his Bellator MMA debut at Bellator 191, airing Friday on Spike TV. ‘Mayday’ signed with the promotion earlier this year, after requesting his release from the UFC. The bantamweight’s promotional debut was hotly anticipated, but it didn’t go down quite as planned. In advance of the bout the contest was switched to a 138lb catchweight. Opponent Peter Ligier came in at the bantamweight limit, while McDonald weighed in at 137.6 lbs.

Ligier, like McDonald, was making his Bellator debut at the event, which went down in Newcastle, England.

McDonald attacked the lead leg of Legier early, and dictated the action. He’d attack with a knee, and find a home for his left hand. Ligier answered back with a knee of his own later in the round, but McDonald was getting the upper hand on the feet. Later in the round, McDonald, with his opponent’s timing down, changed levels for a takedown. To Ligier’s credit, he was able to stuff the attempt initially. ‘Mayday’ however continued to press along the fence. Ligier would look to land a spinning back fist off the break, but fanned on it just as the bell sounded.

In the second, while continuing to counter-strike effectively on the feet, McDonald scored the first takedown of the bout. Ligier, however, was quick to regain his feet. He then initiated a clinch against the fence, and looked to land some knees. Later in the round, McDonald would score with a right hand followed by an uppercut, in what to that point were the most significant strikes of the round.

Early in the third, McDonald took the action down. He would stay active enough to keep the fight on the ground, while Ligier stayed busy on the bottom, adding elbows and even managing to cut McDonald open. Ligier would finally power back to his feet with ninety seconds to go, only to have McDonald immediately take him back down. He deftly avoided a guillotine attempt by the French fighter, and nearly had the back. Ligier, for his part, was able to reverse position, but it was too little too late. The judges had it for McDonald, and there was never any question.

After the bout, McDonald noted that he broke his hand at the end of the second round. 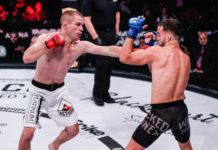 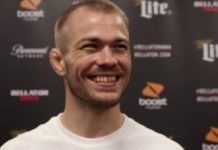 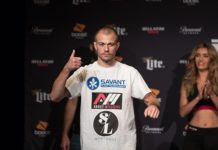