Bellator 190 saw a middleweight title fight over quick, and a lightweight standout get back in the win column.

Bellator MMA was back in action on Saturday, airing a card topped by middleweight champion Rafael Carvalho defending against Alessio Sakara. Sakara had won three straight heading into Bellator 190, with wins over Brian Rogers and Joey Beltran in the promotion.

Going down in Florence, Italy and airing on Spike TV via tape delay, the main event of Bellator 190 didn’t take long to unfold. In fact Carvalho took just forty-four seconds to defend his belt. Setting the finish up with a knee by the cage, the champion uncorked a crushing elbow that dropped Sakara to the canvas. Follow up strikes were barely necessary — Sakara was finished.

With the win, Rafael Carvalho improved to 15–1. Securing his third straight title defense, he has not lost since his pro debut in 2011. Next in line will be Gegard Mousasi. That fight is expected to take place sometime next year.

Also on the Bellator 190 card, lightweight standout Brandon Girtz got back in the win column. He secured the TKO finish of Croatia’s Luka Jelcic in just under two minutes. The loss put an end to Jelcic’s four fight win streak.

The Bellator 190 card was paired with Bellator Kickboxing 8. Welterweights Raymond Daniels and Giannis Boukis appeared in the main event. 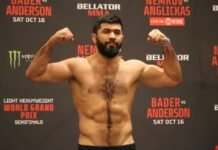 With Tony Johnson Out, Ex-Champ Rafael Carvalho Steps Up Against Dovletdzhan Yagshimuradov at Bellator 277 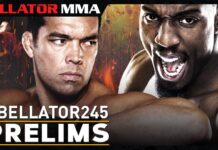