In a hard-fought lightweight battle, Jared Gordon made the most of his gas tank and outlasted Hacran Dias for a well-earned unanimous decision victory at UFC Sao Paulo.

Every win in MMA is an important one, but the bout between Dias and Gordon had a bit more purpose than most. Dias hadn’t yet fought in 2017, and had lost four of his last six in the UFC, including his last two bouts. While Dias had been struggling inside the Octagon, Gordon’s struggles have primarily been personal.

Dealing with various bouts of drug addiction, overdoses, and several rehab stints, Gordon’s personal battles have had their role in slowing his professional rise. Despite those issues, Gordon came into UFC Sao Paulo on a four fight winning streak, defeating Michel Quinones in his promotional debut at UFC Oklahoma City in June.

Both fighters also missed weight in their previous bouts, but managed to get back on track in Brazil. Reason being, rather than competing at featherweight, as both fighters had in their most recent bouts, Saturday’s bout took place at lightweight — a division both Dias and Gordon had previous experience in.

Dias came out the more aggressive fighter in the first round, and cut Gordon above his right eye with an accidental headbutt following a scramble in the first couple minutes of round one. Dias landed consistently throughout the first five-minutes, winning a largely uneventful first frame 10-9.

Gordon pushed the pace in the second round, but was unable to translate it into an advantageous position early-on. Both fighters looked much more tired than in round one, with strikes landing for Gordon at a regular-rate, despite the lack of damage being done to Dias. Wearing Dias down throughout the second round, Gordon continued to throw strikes for the final minutes after finally getting top-position on an exhausted and grounded Dias.

Dias was struggling to his corner following the end of the second round, and Gordon kept the pressure on the Brazilian early in the third and final round. Dias stood tall, before an eye-poke from Gordon paused the action with a couple of minutes remaining.

Gordon landed a takedown out of the break, which was reversed by Dias, and then quickly reversed again by Gordon, who took top position with 90-seconds remaining. Gordon pounded on Dias for the final seconds of the fight, and after a weird pause from referee Mario Yamasaki, Gordon ended the bout easily defending a last ditch attempt at an arm-bar from Dias.

A hard-fought battle resulted in a unanimous decision (29-26,29-27,30-26) victory for Jared Gordon, in a straightforward victory for the up-and-coming prospect. While he kept his record clean of defeats, Dias suffered his third consecutive loss in MMA’s premier promotion. 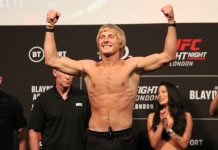 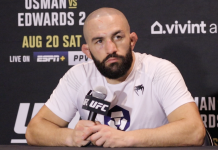 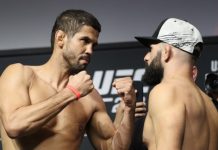