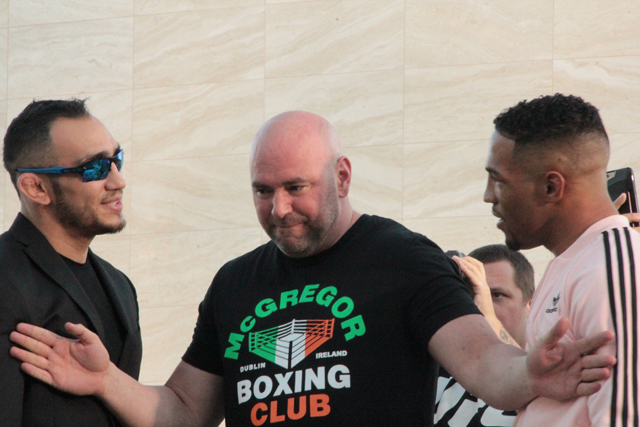 After a brief scare at the weigh-ins, UFC 216 is all set to go, as are Cageside Press’ picks.

While UFC 215 featured a great diversity in its main card picks, the staff is on the same page for the most part for UFC 216.Three fights featured unanimous selections for the nine staff members while the other two were lopsided picks.

The main event for the interim lightweight title nearly fell apart due to Kevin Lee missing weight on his first attempt. After being given another hour, Lee shed the final pound and the headliner was all set. Tony Ferguson and Kevin Lee are the two hottest contenders in a division with an absent champion, giving this fight a bigger feeling. Ferguson has won nine consecutive bouts, while Lee has been victorious in five straight, winning nine of his last 10 fights. Tony Ferguson was picked by seven of the ten writers, with three believing Lee will upset El Cucuy to win gold.

In the co-main event, Demetrious “Mighty Mouse” Johnson looks to set the UFC title defense record against Ray Borg. This was supposed to occur at the last pay-per-view, but Borg fell ill on fight week and pulled out. With that, dominance from Johnson is expected, with all ten writers predicting an eleventh title defense.

From the smallest men in the sport to the largest, Derrick Lewis takes on former heavyweight champion Fabricio Werdum. Werdum has done no favors to himself in terms of popularity recently, using homophobic slurs at every corner. Meanwhile, Derrick Lewis’ efforts during Hurricane Harvey only gained him fans. Lewis recently had his six-fight win streak cut off by Mark Hunt, while Werdum has lost two of his last three. “The Black Beast” is favored by all but three writers.

Opening up the main card is a sneaky good lightweight fight between Evan Dunham and Beneil Dariush. Despite Dunham bringing in a four-fight win streak, all of Cageside Press’ writers believe Dariush will get back to his winning ways in this one.