Bellator MMA announced Friday that women’s featherweight champion Julia Budd would be topping the card at Bellator 189 this December, and making her first title defense in the process. She’ll be facing Arlene Blencowe for the second time in the main event of the card, set to take place at the WinStar World Casino in Thackerville, Oklahoma.

A post shared by Julia "The Jewel" Budd (@championjewel)

Canada’s Budd (10-2) defeated Marloes Coenen to capture the inaugural Bellator women’s featherweight championship at Bellator 172 this past March. Prior to that, the 34-year old B.C. native had defeated Blencowe by majority decision in their first meeting. Budd is a perfect 4-0 in her Bellator MMA run thus far, and went a perfect 4-0 in Invicta FC prior to that.

The Canadian started her career in Strikeforce, where she amassed a record of 2-2. Outside MMA, she’s also an accomplished kickboxer.

Arlene Blencowe (10–6) has won three straight since her defeat at the hands of Julia Budd last October. Two of those victories came outside of the promotion, but her most recent went down at August’s Bellator 182, where she captured a split decision against Sinead Kavanagh.

In the co-main event, middleweight Chris Honeycutt (10-1) will take on jiu-jitsu ace Rafael Lovato Jr. in a bout that could thrust the winner into title contention. Lovato is a perfect 6-0 in his MMA career, while Honeycutt has won four straight under the Bellator banner. 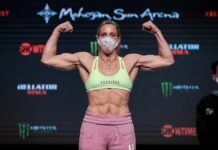 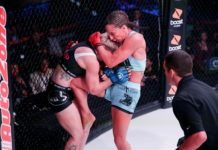