Phil Davis has his opponent for Bellator’s big Penn State show in November. According to a report by Combate, Davis will meet Brazil’s Leonardo Leite at Bellator 186, which takes place November 3 at the Bryce Jordan Center at Pennsylvania State University in University Park, PA. Davis, a former Bellator light heavyweight champion, is a Penn State alumni, having wrestled for the school with an overall record of 116–15. During that span, Davis won the NCAA title in 2008 and was a four-time NCAA Division I All-American.

Bellator MMA fans may not be familiar with Davis’ scheduled opponent, Leo Leite, as he’ll be making his promotional debut at the event. The thirty-nine year old Brazilian is a perfect 10-0 as a professional, however, and appeared previously with Legacy FC, among other promotions. A member of Brazil’s Olympic Judo team in 2008 and 2012, Leite is three-time Pan American Judo champion, and holds multiple championships in jiu-jitsu. The grappling star was signed by Bellator just days ago, and they’re wasting no time getting the fighter, who held both the middleweight and light heavyweight championships in Legacy, into action.

Phil Davis, meanwhile, will be returning to the Bellator MMA cage for the first time since losing his light heavyweight championship to Ryan Bader at Bellator 180 this past June. Prior to the loss, Davis (17–4 (1)) had won four straight in Bellator, capped off by his defeat of Liam McGeary for the 205lb championship. Over the course of his career, Davis has picked up wins over a plethora of top light heavyweights including Alexander Gustafsson, Glover Teixeira, Little Nog, Loyoto Machida, and King Mo. 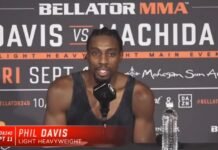 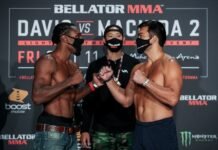