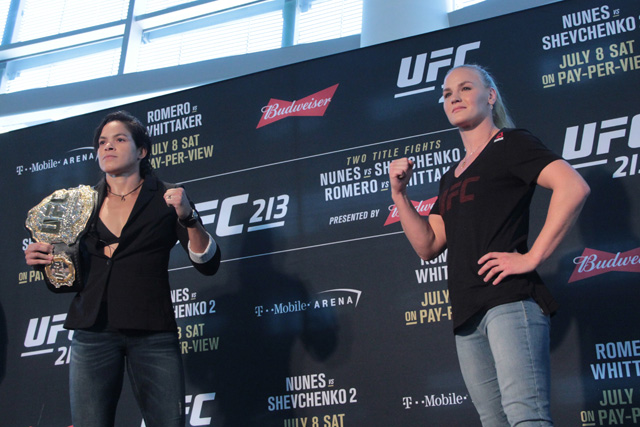 After many headlines, we have finally reached the rematch between Amanda Nunes and Valentina Shevchenko to see who is the best bantamweight in the world.

After several blows to what was already a challenging card to sell, UFC 215 has arrived with the top female bantamweights in the world colliding for the undisputed championship. Plenty has been said about the match-up, not all of it pertaining to just inside the cage.  However, it is the second chapter in what could be the next great rivalry in MMA.

The fight has been delayed nearly two months to the day.  Amanda Nunes pulled out of the rematch on the morning of UFC 213 citing sinusitis.  Similar to UFC 215, what was originally a stacked card in July suffered big losses on paper and was very underwhelming come the actual night of the fight.

For Nunes, the backlash was a quick turn of events considering she was coming off a high profile victory over Ronda Rousey to defend her title.  Dealing with accusations of cowardice and unsportsmanlike conduct, she now has a chance to return balance to her career with an impressive victory.

By comparison, Valentina Shevchenko has in four fights made herself the second best women at 135 pounds.  The Kyrgyzstani striker lost a decision to Nunes last year before reeling off two impressive victories over Holly Holm and Julianna Peña.  While contenders such as Raquel Pennington and Sara McMann work their way back up to title contention, Shevchenko stands out as the woman who could take the crown from Nunes.

Before 2016, the trifecta of Rousey, Holm, and Miesha Tate had a stranglehold on the division.  Nunes and Shevchenko have changed all that, taking out top competition en route to Saturday’s championship match.  As the old guard has now phased out, the winner of Saturday’s main event would be recognized as the best fighter of the post-Rousey era.

Stylistically, the bout can be dissected in a number of ways which makes for an intriguing match-up.  Nunes has come into her own as a powerful striker and throws with more confidence than she did earlier in her career.  The champion has evolved to a point where she is comfortable on the feet exploiting her long range, simultaneously keeping opponents weary of her power in the earlier rounds.  On the ground, she’s an accomplished grappler who in the first fight was able to threaten Shevchenko with submissions.

The challenger from Kyrgyzstan has recently shown a competent ground game to compliment her fantastic striking.  She’s displayed a multi-faceted game on her way to a title shot: winning a five round striking affair with former champion Holm when “The Preacher’s Daughter” was barely removed from holding the title then following up with a submission of grappling specialist Julianna Peña in a title eliminator.

The are three major factors when breaking down the rematch.  The most obvious being the improved striking of Nunes.  In the first fight, Shevchenko was too patient and fell into an early deficit against the Brazilian.  Nunes will undoubtedly look to put early pressure on, where her power is at it’s highest and she can begin to disrupt Shevchenko’s rhythm.  After two straight first round finishes, we have yet to see how Nunes’ power will translate into the later rounds.  If she can’t finish Shevchenko early, it will be imperative that she makes the challenger hesitant on the feet and open her up for takedowns.

The second is cardio, as Nunes hasn’t had to show whether or not her gas tank has improved since the first fight.  Historically, it is where Nunes has struggled.  Her only loss in the UFC was to Cat Zingano in a fight the Brazilian was dominating before “Alpha” took advantage of an exhausted Nunes to win in the third round.  In the first match with Shevchenko, fatigue and damage led to a very dominant round by the “Bullet.”

After several decisions and a five round victory to her credit, Shevchenko has the more proven gas tank.  Assuming that Nunes were to slow down, it would be up to Shevchenko to capitalize and increase her output.  On the other hand, Nunes could look to wear down the challenger early in the clinch and using her size.  Another component: leg kicks.  The champion can look to take away Shevchenko’s mobility by an accumulation of kicks throughout the fight.  The challenger is an improved grappler, but it isn’t likely that she looks to consistently go to the mat with Nunes.

The final factor is the grappling.  Nunes has not had to use much of her grappling as of late but still looks to have the decisive advantage on the mat.  It has been seen that Shevchenko has become more comfortable with her jiu-jitsu, choosing to go to the ground with Nunes in the third round of their first fight and submitting Peña off of her back.  Head-to-head, Nunes is favored to be the one to get Shevchenko on her back in the fight.  Despite any strides she’s made, it’s imperative that the challenger spend as little time on the mat as possible and just look to get back to her feet.

What can’t be measured is the effect confidence will have.  Both women are at the height of their powers and have all the momentum going into the match-up.  At 29 years old, the pair have the potential to collide again in their careers and become another great rivalry in women’s MMA.  As for the rematch, it has all of the storylines to be a classic: redemption, vindication, and of course, championship gold.