The second bout of the UFC Rotterdam main card featured the UFC’s oldest female fighter against pretty much its newest. Talita Bernardo stepped in as a short-notice replacement for former featherweight champion Germaine de Randamie when the “Iron Lady” pulled out due to injury. She met Marion Reneau in Rotterdam in the second fight of the UFC Fight Night 115 main broadcast. Reneau recently became the first forty-year old female fighter in the promotion.

How did she fare against the younger newcomer from Brazil?

Marion Reneau came out attacking early pressing forward and pressuring Talita Bernardo into backing up against the fence. However, the Brazilian changed levels and quickly secured a takedown. Reneau displayed an active guard, looking to escape before settling in with a closed guard. As Bernardo postured up, Reneau was able to slip in some upkicks, but none landed flush. A sweep ended with Reneau on top, but Bernardo was looking to secure a leg lock. Reneau would manage to escape, but the Brazilian was again on top; Reneau looked for a triangle, and when that wasn’t to be had, moved into an arm-bar attempt.

In round two, Reneau went to the body, and looked for an opening for her overhand right. A couple of 1-2 combinations landed about a minute in for the older fighter, while Bernardo changed levels and looked for a takedown shortly after. Reneau, however, was able to stay on top and maintain composure. While winning the exchanges on the feet, Reneau couldn’t stay up on a later takedown attempt, as Bernardo overcame Renau’s sprawl. However, a guillotine defense allowed Reneau to make it back to her feet, and she began walking down her opponent. The jab and cross from Reneau continued to be a factor at round’s end, as she connected again and forced Bernardo into a desperation takedown attempt as the bell rang.

Looking to build off the end of round two, Reneau went right into battle in the third and final round. That, however, resulted in a clinch that gave Bernardo the chance to get the fight to the canvas. An elbow then opened up a bloody cut on Reneau. Reneau, however, looked to lock in a triangle, while fishing for an arm. Bernardo would pressure her and escape the submission attempts, but they kept her from adding any offense of her own, and Reneau was actually able to transition to Bernardo’s back. She soon had both hooks in and looked to lock in a rear naked choke. While it wasn’t under the chin, she was wrenching on Bernardo’s neck. The Brazilian would survive, but was soon eating some heavy ground and pound. Covering up, she would again escape being finished, and Reneau went back to a choke attempt, then back to ground and pound, earning a TKO finish with just seconds to go in the fight!

After the bout, Reneau addressed her age, saying “Forty is the new twenty. I am forty this year, and that felt amazing!” 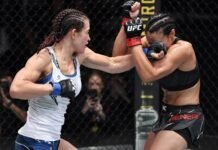 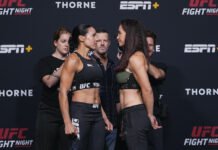 UFC Vegas 31: A New Dawn for Tate or a Ride Into the Sunset for Reneau? 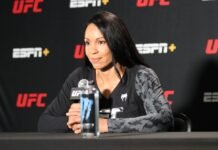