The co-main event of UFC Rotterdam Saturday saw a late shakeup thanks to an injury to former women’s featherweight champion Germaine de Randamie. With de Randamie off the card, opponent Marion Reneau was demoted down a slot, and middleweight Siyar Bahadurzada was moved up along with opponent Rob Wilkinson. The action took place at the Ahoy Rotterdam Arena, and followed a fantastic bout between Reneau and replacement fighter Talita Bernardo.

For Rob Wilkinson, it was his promotional debut at UFC Fight Night 115, and the question of octagon jitters was a big one.

Early in the first round, Wilkinson went high with a kick, only to have Siyar Bahadurzada dump him down to the canvas. Bahadurzada was swinging heavy, and played the aggressor early, while Wilkinson looked to create distance with his jab and some leg kicks. A swing and a miss by Bahadurzada gave Wilkinson an opening to land a kick to the body, but it looked as if a knockout blow for Bahadurzada might come at any moment. Wilkinson had other ideas, and scored a takedown, only to find himself unable to keep his opponent there. That, however, led to Wilkinson grinding on Bahadurzada against the fence, eating time off the clock.

Breaking free, Siyar landed a left hook, and followed it up with a hard kick to the midsection which could be heard (if not felt!) throughout the arena. He then moved in for a D’arce choke attempt, which Wilkinson was able to defend. He’d later score another takedown, but was again unable to hold Bahadurzada in place. As the round ended, however, a knee to the head by Wilkinson definitely captured Bahadurzada’s attention.

Round two saw Bahadurzada head hunting again, but Wilkinson’s reach advantage allowed him to stay out of range. An overhand right wobbed Wilkinson with just over three minutes remaining, but he recovered quickly. Shortly after Bahadurzada dropped Wilkinson with a short uppercut and pounced! A vicious flurry of strikes followed, with Rob Wilkinson trying to escape in vain. Eventually, he was left unable to do anything more than cover up, while the ref watched on, then finally waved it off. 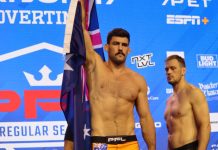 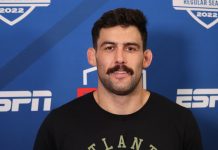