According to a report by Brazil’s Combate, light heavyweight notable Antonio Rogerio Nogueira (otherwise known as Little Nog) has been booked against Jared Cannonier at UFC Norfolk in Virginia later this year. The bout will mark Nogueira’s first since falling to Ryan Bader in November of last year. The Brazilian had been linked to a bout with Ilir Latifi at UFC Oklahoma in June, but was pulled from that card due to a neck injury suffered in training.

Nogueira (22–8) is just 1-3 in his last four, and at age 41, father time appears to be nipping at his heels. With brother Antonio Rodrigo Nogueira having retired, Little Nog may not be long for the fight game, and his pairing with Cannonier has all the hallmarks of a fight built to give a younger fighter a shot at a “name” win.

Jared Cannonier (10-2), meanwhile, will look to build a two-fight streak against Nogueira. After starting his UFC run at heavyweight, Cannonier looked impressive at 205lbs, but was given a step up a little too soon against Glover Teixiera at UFC 208 this past February. Cannonier, however, bounced back in July at the TUF 25 finale, finishing Nick Roehrick with elbows.

UFC Norfolk, a.k.a. UFC Fight Night 120, takes place November 11 at the Ted Constant Convocation Center in Norfolk, Virginia. No main event has been announced for the card. 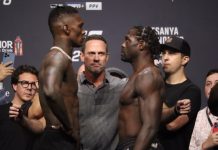