It’s official: as expected, Amanda Nunes vs. Valentina Shevchenko 2 will serve as the co-main event of UFC 215 in Edmonton this September. Not only that, but the card will be headlined by a potentially record setting title defense by Demetrious “Mighty Mouse” Johnson, who will face Ray Borg in the main event. UFC President Dana White confirmed the news to Canada’s The Sports Network (TSN) on Thursday.

It ends weeks of speculation regarding Johnson’s next title defense, which was brought into question when the UFC tried to pressure Mighty Mouse into facing bantamweight T.J. Dillashaw. UFC 215 had been the card many expected the flyweight champion to return at. The fight will mark Johnson’s eleventh consecutive title defense, and if victorious, the champ would move into sole possession of the title defense record. Currently, he’s tied with Anderson Silva.

Borg (11–2) is one of the last remaining challengers not already defeated by Johnson in the flyweight ranks. He will enter UFC 215 on a two-fight win streak, having defeated both Louis Smolka and Jussier Formiga.

Nunes and Shevchenko, meanwhile, has been re-booked after Nunes was forced off this month’s UFC 213 card at the last minute. 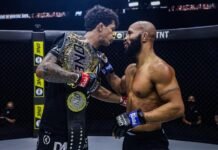