It’s another big weekend in the MMA world, and Legacy Fighting Alliance is a big part of it. The promotion checks in Friday with LFA 14: Allen vs. Anders. It’s a huge night for LFA, which will crown its inaugural middleweight champion in the main event. Since good things always come in twos, the co-main event slot will also crown a champion, with the flyweight title being on the line.

There’s also the debut of Colbey Northcutt, sister of UFC star (and former LFC competitor) Sage. Colbey (0-0) ran up a 4-1 record on the amateur scene, but took time off to focus on her schooling. She’s back in action for the first time since 2014, and faces another promotional newcomer, Courtney King, in her debut. King, like Northcutt, has spent time honing her skills in amateur bouts, and is ready to turn pro.

The event takes place at the Arena Theatre in Houston, TX, airing living on AXS TV and Canada’s The Fight Network.

Below, we’ll take a peek at the main card.

LFA 14 opens with a women’s strawweight tussle between Itzel Esquivel (2-0) and Maycee Barber (0-0), who makes her professional debut Friday night.

Esquivel will be making her sophomore appearance for LFA, as she debuted for the promotion at LFA 7, scoring a submission victory over Brandi Narvaez. That brought her to 2-0 as a pro, with both submissions being via arm-bar.

Don’t let Barber’s apparent inexperience fool you, however. Despite making her pro debut, she is a lifelong martial artist who has competed in BJJ, and won her amateur debut in January, needing all of twenty seconds to knock out opponent Christina Breault.

As mentioned, Colbey Northcutt will make her professional MMA debut at LFA 14, taking on fellow newcomer Courtney King. Both fighters have spent time honing their skills in the amateur scene, but it’s Northcutt who will no doubt find herself under the microscope, thanks to brother Sage’s UFC fame.

While it’s not entirely fair, the comparisons will be inevitable. Colbey Northcutt, like Sage, comes from a karate background and won titles in multiple organizations including NBL, NASKA, WAKO, and WSKF. After amassing a 4-1 career record and competing in Legacy kickboxing as well, she took time off to focus on her studies, something she had put on hold to train for an MMA career.

With the family pedigree and her karate background, it’s not hard to envision Colbey reaching the pinnacles of the sport. That journey will start Friday against King.

Bantamweights David Acosta and Dulani Perry clash in the evening’s third main card bout. Sugarland, TX born David Acosta (5-1) trains out of Team Alpha Male, and is making the jump to 135lbs from the flyweight ranks. With a background in Jiu-jitsu and a stellar team behind him, Acosta is likely to be a handful for any opponent.

There’s a fair bit of trash talk leading into this one, which could make things interesting.

Gregg Dulani Perry (3-0) is no stranger to trash talk. After his last win at LFA 7, Dulani called out Conor McGregor, and added “I’ve been doing this for 26 years. I am ‘The Fight God.’ I am the god of fighting. No fighter on this earth will ever beat me.”

Acosta, who told Sportsnet’s James Lynch that he’s going up in weight just to fight Perry, will look to prove him wrong.

Danny Orr, who had a perfect amateur career and went 4-1 as a pro (with all fights under the Legacy FC banner), makes his LFA debut against Noel Ligon at LFA 14 Friday night.

Orr hasn’t fought since a light heavyweight contest against Chad Cook at LFC 59 in September of last year. “Fat Boy” got back in the win column that night after entering off his first career loss. He forced Cook to tap to strikes just over a minute into the first round. Against Ligon, he’ll look to keep that momentum going.

Noel Ligon (5-1), meanwhile, had his perfect record spoiled by Gilbert Urbina at LFA 7. That bout, however, came after a near five year absence from the sport, a result of a torn ACL and multiple surgeries. Assuming his first bout back got the jitters and cage rust taken care off, this scrap against Orr holds promise.

The first of the evening’s two title fights sees flyweights Roberto Sanchez and Jerome Rivera throw down for the vacant 125lb title.

Sanchez (6-0) has been featured on Dana White’s Lookin’ For A Fight, and is coming off a win over Klayton Mai at LFA 7. Having fought his entire pro career under the LFA and Legacy FC banners, “Little Fury” has submitted his last five opponents.

Jerome Rivera (7-0) is just twenty-two, but boasts a perfect record with five submissions of his own to date. He has already won two bouts this year, and will look to make it a third — and capture gold — at LFA 14.

The main event of the evening will see LFA’s inaugural middleweight champion crowned. Brendan Allen (7-1) has seven stoppages in seven pro fights, and will meet the undefeated Eryk Anders (6-0), who has finished all but one of his own pro bouts.

In short, there’s a very good chance this fight does not go the distance.

Training with Rich Clementi’s Gladiator Academy, Allen feels he has the advantage just about everywhere in this bout. Promoting the fight last month for LFA, Allen said “anyone can be dropped. I do think that’s all he has though. I don’t think he has better skills than I do standing, in the clinch, wrestling or in Jiu Jitsu.”

We’ll find out Friday when LFA 14 goes down! 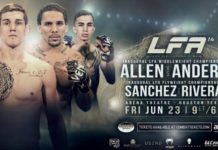