With today’s news that Invicta FC featherweight champ Megan Anderson would be jumping to the UFC for a fight against Cyborg Justino in July, Invicta FC 24 was in need of a new main event. The promotion has now announced just what the new main event will be: a three-round featherweight battle between bantamweight champ Tonya Evinger (19–5 (1)) and Helena Kolesnyk (5-0, 1 NC). Kolesnyk had previously been signed to face Anderson for the promotion’s featherweight title.

Evinger was last seen at Invicta FC 22, where she successfully defended her bantamweight crown against Yana Kunitskaya. That was a rematch of their Invicta FC 20 meeting, which resulted in a submission win for Kunitskaya being overturned due to a referee error.

Kolesnyk enters the promotion on a three fight win streak, following a no contest at WBK 12 in 2016. All five of her wins have come via stoppage.

Also announced for the Invicta FC 24 card are the following bouts:

Dudieva (11–5) will be making her Invicta debut after going 1-2 in the UFC. Her opponent, Mara Romero Borella, will also be making her promotional debut. Ultimate Fighter veteran Ashley Cummins, who has also appeared with Bellator, returns to the Invicta FC cage as well that night. Cummins is on a two fight win streak heading into the bout against Jinh Yu Frey. Frey (5–2) is 3-2 overall in Invicta, but suffered her second pro loss at Invicta FC 19, to Ayaka Hamasaki. 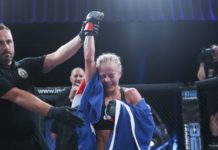 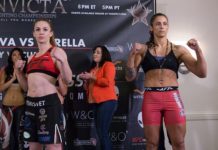 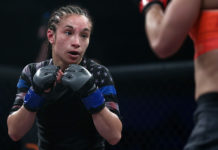