Missouri native Ashley Cummins has a big fight ahead of her Saturday July 15 in Kansas City, MO. At Invicta FC 24 that night, she’ll square off against the talented Jinh Yu Frey, the last woman to challenge for atomweight gold in the promotion. With atomweight champion Ayaka Hamasaki plying her trade at strawweight of late, this is a big fight for the division, and should tap the next title contender. Something Ashley “Smashley” very much wants to be.

Cummins spoke with Cageside Press about the Frey fight, and how she got her start in MMA, leading into Invicta FC 24 this weekend.

So how did a kid who grew up playing soccer fall in love with mixed martial arts? “I spent my whole childhood from five years old to eighteen doing karate and soccer” she explained. “I always wanted to do kickboxing and wrestling in high school, I knew I wanted to fight, but my parents wouldn’t let me. Once I started my freshman year of college, I was like ‘well they can’t stop me anymore’ so I started training at a local MMA gym, and I just fell in love with it right away.”

That love of MMA led to her first professional fight in 2011. She won that night, securing a submission against Chelsea Colarelli at XFL 5, and less than a year later, she was fighting it out in Invicta FC, making her promotional debut at their inaugural event, at the time a strawweight. Cummins has been a staple of the promotion ever since, making just one trip outside the all-female promotion to take a Bellator fight last year. Invicta is the place for atomweights, however.

And thankfully, her parents have long since come around to the idea of her fighting. “They’re obsessed with it now” she said. “My parents are my number one fans, they go to all my fights, they’re huge supporters of my MMA career.”

That career has brought her to a point where she could soon be fighting for a title. Cummins (5-3) will have won three straight if she’s successful Saturday night, and given Frey’s status as a former title challenger, a win would be quite the notch on her belt.

That said, Cummins still has a life, and specifically a career, outside of fighting, as she’s an active police officer in St. Louis County. So how does she handle the balance between her law enforcement career, and her personal life?

What got her into law enforcement originally? “It sounds cliche,” she answered, “but I wanted to try to help the community by making it safer. A lot of people say that, but that was honestly my interest in law enforcement.” An interest that dictated the course of her education and career. “I went to college with the goal to get a degree in criminal justice, and soon as I got my degree, I joined the police academy right away.”

With fighter pay always being a hot button issue, is this one of those situations where a fighter has to work to make ends meet? For Cummins, that’s not the reason she’s working in policing. “I get asked that question a lot, people ask ‘if you ever made a ton of money fighting MMA, would you quit law enforcement?'” she said. “My answer is always no. I love my career of being a police officer, and I love my career of being a fighter. I want to do both. I would be sad without either, with just one. I plan on doing both as long as I can.”

Has the police force been supportive of her pulling double duty? Other aspiring police officers, like the UFC’s Sean Pierson, have hit road blocks along the way. Luckily, it’s been a mostly positive experience for Cummins. “For the most part, I’d say yeah” she told us. “When I was in the police academy, I think they weren’t supportive, I ran into a couple problems here and there. But overall since then, since I’ve gotten out of the academy, for the past seven and a half years they’ve been great.”

That’s not to say there hasn’t been some concern. “There was a point in my career, after I fought Joanne Calderwood, I had to get surgery on my face, to get my vision back. I had to get a plate under my right eye. I had three broken orbital bones. I think at that point my department was a little concerned, they were like ‘okay, you almost lost your vision permanently, are you still going to do this?'” In the end, however, they supported Cummins’ decision. “They’ve never told me ‘you can’t do this.’ They’ve always been supportive, but obviously they worry.”

With an injury that severe, did the atomweight ever consider walking away from the fight game?

“Oh absolutely, there’s been a couple times in my career where I told myself I’m done, I’m not doing this sport anymore” Cummins replied. “But I’m really competitive, I’m not a quitter and every time I say ‘I’m done, I’m retired’ I’m like ‘nope!’ I have more to prove, I have more goals out there I want to accomplish, and I just want to keep going.”

Cummins feels both careers compliment each other. “My police career helps my MMA career. There have been situations in my police career that were scary, and someone was possibly trying to take my life, and for me that helps with MMA. Everyone gets nervous before a fight, and stresses” she explained. “Going into the cage, there’s not nearly the amount of stress as being in a situation where you could get possibly hurt and killed.” 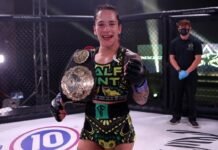 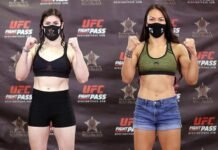 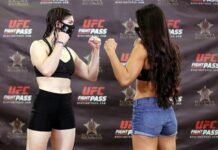