Former UFC heavyweight Brendan Schaub is the latest fighter to join Bellator MMA, though in this case, it will be in the broadcast booth. The retired heavyweight and former football player will serve as co-host for the Bellator NYC: Sonnen vs. Silva pre-show on Spike TV, the promotion announced in a press release today.

Schaub (10–5) spent most of his career with the UFC, retiring in 2015 after friend and UFC commentator Joe Rogan publicly urged him to call it a career. Since then, he has served as co-host of MMA podcast “Big Brown Breakdown” and co-host the “Fighter and the Kid” podcast. He has also been a frequent participant on Joe Rogan’s podcast as well.

Bellator 180 features a light heavyweight title fight between champion Phil Davis (17–3 (1)) and newly signed challenger Ryan Bader (22–5) in a rematch of their January, 2015 bout in the UFC. Chinzo Machida and Neiman Gracie also appear on the card, which essentially serves as the prelims for Bellator NYC, with Chael Sonnen meeting Wanderlei Silva in a grudge match, and Fedor Emelianenko taking on Matt Mitrione.

Bellator 180/NYC takes place June 24 at New York City’s legendary Madison Square Garden. With his addition, Brendan Schaub joins the likes of Randy Couture, Royce Gracie, Ken Shamrock, Tito Ortiz, and others who have signed on to the Viacom-backed promotion in various roles in and out of the cage. 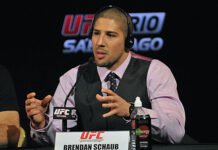