It appears UFC 214 just took a heavy blow. According to noted MMA analyst Robin Black, the Korean Zombie Chan Sung Jung is injured and has been forced to withdraw from the card. Jung had been expected to meet Ricardo Lamas at the event.

BREAKING NEWS: @KoreanZombieMMA is injured and out of his fight w @RicardoLamasMMA at @ufc #UFC214 as per his team. @KirikJenness

Jung, who had missed several years of UFC competition due to serving in South Korea’s military, made a triumphant return to action in February. He defeated fellow featherweight Dennis Bermudez with a stunning KO in the first round of their main event fight. It was Jung’s first bout since UFC 163 in 2013, where he lost a title shot against Jose Aldo, succumbing to punches in the fourth round.

Ricardo Lamas (17–5), who lost to Aldo not long after Jung at UFC 169, is coming off a win over Charles Oliveira at the TUF: Latin America 3 finale. He has traded wins and losses of late, and had suffered a decision loss in an exciting scrap with Max Holloway at UFC 199 prior to the Oliveira win.

There is no word on any potential replacement for Zombie at the event. With news of the Korean Zombie injured though, expect a number of featherweights to step up as potential fill ins. UFC 214 takes place July 29 at the Honda Center in Anaheim, CA. Light heavyweight champion Daniel Cormier meets ex-champ Jon Jones for the second time in the main event. 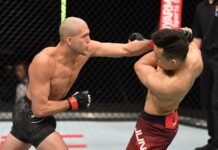