UFC Fight Night 109 took place Sunday in Stockholm, Sweden and got fight fans up bright and early to catch all the action. On the main card, local product Oliver Enkamp (7-0) made his promotional debut against TUF veteran Nordine Taleb (11-4). Taleb entered the bout coming off a loss over Santiago Ponzinibbio, but had previously scored a big win against Erick Silva.

The welterweight battle served as the second fight of the UFC Stockholm main card.

In the first round, Taleb opened with a strong leg kick as both men began the feeling out process. Enkamp pulled off a spinning back kick early that connected. Taleb, meanwhile, stuck with a more traditional approach, mixing in leg kicks and punches. The younger Enkamp, looked to counter. He would throw several more spinning kicks, then shoot in for a takedown that just missed.

Enkamp proved to be tenacious, however, refusing to give up on the takedown attempt. Taleb would defend along the cage, but Enkamp would continue to press, finally securing the takedown with roughly two minutes to go in the first round. Taleb was back to the feet in a flash, but Enkamp connected with a glancing shot that dropped him. Taleb would land a short left shortly after. The pair would clinch and exchange knees, with Taleb throwing his opponent to the floor and moving into Enkamp’s rubber guard. Enkamp managed to swivel his hips and attempt to latch onto an arm, but Taleb escaped. Regardless, Enkamp looked fantastic on the ground and on the feet.

Enkamp should have had a great confidence boost after the first round, and came out with more flashy strikes, connecting several times early in the round. Taleb answered back with a jab and leg kicks, but Enkamp constantly appeared to be a threat. Footwork became key in the second as Enkamp stayed heavy on his back leg and was able to rush forward explosively when needed, but escape just as easily when Taleb threatened.  Taleb was able to land a left hook then stuff a takedown with about a minute remaining in the second. A scramble followed with Taleb landing on top. Some short elbows landed, but Enkamp threatened to grab an arm again. Some slick ground transitions led to Taleb back in half guard, then full, managing to drop a few more elbows before the hord sounded.

The third and final rounded may have required Taleb to secure a finish, though the second round wound up closer than the first. Enkamp would attempt to shoot in about a minute into the round, but Taleb easily avoided the takedown. Enkamp’s movement continued to be key, as he was able to keep range against his opponent. Taleb caught a kick, eating a punch but landing a hard leg kick to Enkamp’s shin. Taleb would then change levels beautifully and take the younger fighter down. Enkamp would threaten with a guillotine, but didn’t have it locked in. Taleb was able to control, pivoting against the fence and moving Enkamp away from the cage. Enkamp would threaten with a triangle, but ultimately they would go to the judge’s scorecards. Taleb would take the unanimous decision in the end.

Be sure to check out our UFC Fight Night 109 Fight Pass Prelim and Fox Sports 1 Prelim results and recamp. 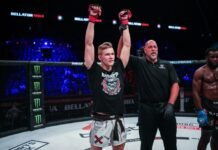 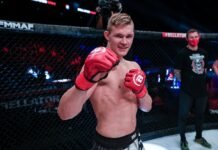