UFC Stockholm’s main card kicked off in brutal fashion, with a ground and pound TKO from Jack Hermansson.

Alex Nicholson made his UFC debut on a five fight win streak, but the main who greeted him to the Octagon was co-headliner Misha Cirkunov. After getting his jaw crushed by the Canadian, Nicholson returned to middleweight and notched his first UFC victory with a comeback knockout against Devin Clark.

Jack Hermansson made his name known on the European circuit with 13 wins overseas before joining the UFC. His two losses prior to entering the Octagon were with Bellator MMA on American soil. Hermansson has split his UFC fights so far, going 1-1 with a decision over Scott Askham.

Hermansson landed a stiff jab to kick things off, then a beautiful double leg takedown. Hermansson was immediately in side control. The ground and pound was heavy and Nicholson squirmed his way to the fence, and Hermansson used the opportunity to jump into full mount.

Nicholson turned and exposed his back and Hermansson pounded away. Brutal punches from back mount bloodied Nicholson, and the referee had no choice but to stop the contest. For some reason, Nicholson argued that the stoppage was unjustified, but it was clear to everyone in attendance that things were only going to get worse for Alex Nicholson.

The crowd exploded for their countryman’s second UFC victory. One could only wonder what the noise level will be if Gustafsson pulls off a victory in the main event. “The Joker” called out any ranked opponent for his next fight after a very impressive showing at UFC Stockholm.

Nicholson, on the other hand, will likely receive his walking papers after this one, as he falls to 1-3 in the UFC. 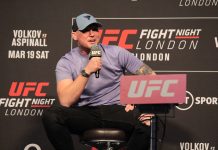 UFC 274’s Tracy Cortez: “Hopefully I Can Put Arizona On The Map”