Another bantamweight banger is set for a UFC event in April.

ESPN Deportes was first to report news of the booking.

Gutierrez has not lost a fight since dropping his promotional debut against Raoni Barcelos in 2018. Since then, he has posted a 7-0-1 record, with the draw in question coming against Cody Durden in 2020.

The 31-year old has won four straight, including a Performance of the Night-winning finish of Danaa Batgerel, and most recently, a flying knee KO of Frankie Edgar.

Defeating a former champ in Frankie “The Answer” Edgar has no doubt set Gutierrez up for bigger things. The first of those arrive in the form of Munhoz, who sits inside the top 10 at 135lbs in the #9 spot. Gutierrez himself is ranked #12.

Munhoz last competed at UFC 276 in July against Sean O’Malley, where an accidental eye poke rendered him unable to continue. The fight was ruled a No Contest as a result.

Prior to that, “The Young Punisher” was just 1-4 in his last five, including losses to four former or future UFC champions: Dominick Cruz, Jose Aldo, Frankie Edgar, and Aljamain Sterling.

The UFC’s April 15, 2023 Fight Night event does not have a venue, location, or broadcast plan officially announced. The following fights have been reported for the card: 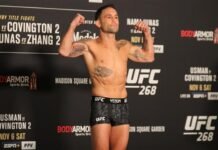