Jay Perrin has not seen the easiest road in the UFC so far. After taking a short notice bout with Mario Bautista, he was given tough Chinese prospect Qileng Aori in his sophomore bout. Even with the results not being what he imagined, Perrin believes that his fun performances has earned credit with the UFC brass. The results is a big fight that he feels almost is a favor to him – whether or not they intended it to be.

“I’ve been given no favors in the UFC, as far as opponents,” Perrin shared adding about his bout with 18-year old Raul Rosas Jr. “This one feels pretty close to a favor.”

Part of the reason that this fight feels that way for Perrin is that there is a lot of hype surrounding the fight. So much hype is on the fight, in fact, that it was bumped up to being the featured prelim for Saturday’s UFC 282. The other reason is that he doesn’t believe his young opponent is ready to handle what has been given to him.

“You’re putting a lot of pressure on a kid, man. You know what I mean? He’s a kid and he’s not a grown up,” he said. “People are really enamored with how old he is.”

Despite thinking that Rosas isn’t ready, Perrin does respect that he has skill. However, maybe just not the amount that justifies the amount of talk coming out.

“That’s not to say that he doesn’t have legitimate skill because he does, but he’s not polished,” Perrin said. “I wasn’t particularly impressed with how he got into UFC. I think again, people were stunned that an 17-year old could keep up with a grown man.”

As a result, Perrin expects this fight to start with a bang, but to end not that long after with another.

“It’s going to be an entertaining first round. He’s going to come at me like a bat out of hell, but a young man’s ego is going to be his downfall,” he said. “I’m going to give you a second round finish by way of TKO.”

Perrin’s bout with Raul Rosas takes place on the ESPN+ prelims this Saturday for UFC 282.

You can hear the entire audio of this interview at 29:09. 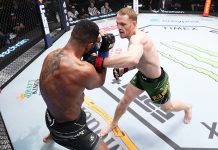